Once Upon a Seaside Murder by Maggie Blackburn 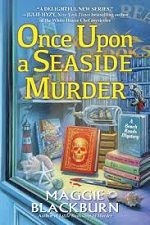 Summer, on leave from teaching as a Shakespeare scholar, now owns Beach Reads after the death of her mother. Her Christmas cheer turns to fear as she uncovers a deadly secret about her mother. When the local library hosts a cozy mystery panel, Summer finds out that one of the authors wrote a novel about an unsolved murder that happened on the island thirty five years ago. When the author's life is in danger, Summer must solve the decades old murder.

This is the second novel in a series. I have not read the first one but felt this one read rather well on its own. Summer is an interesting character as she has reluctantly taken over her mother's bookstore after her mother's death. She is gone from the store frequently, even before a potential mystery occupies her. Her employees often call, asking where she is, over worked and frazzled during the Christmas season. I found Summer a bit hard to like.

Part of the plot didn't make sense to me. There is an author who wrote a novel about a decades old murder and when her life is in danger, a demand is made on Summer. That demand just did not make sense to me. Near the end of the book, as facts are reviewed, Summer says, "It makes no sense." (3998/4395) A revealing statement.

I appreciated an exploration of cozy mysteries by a couple of authors visiting the island for the library panel. They say cozy mystery readers do not want blood and gore. They are more interested in the characters, the setting, and the puzzle of the mystery. This novel is more about characters, namely Summer, and the puzzle of the unsolved mystery. I found it interesting that there was not much to the setting. It's on an island and Summer walks the beach and boardwalk but there is nothing about the birds, the kind of sand, or really much description at all.

Blackburn's writing style is clear and I found the novel entertaining.

Maggie Blackburn is a pseudonym of Mollie Cox Bryan. She is the author of the Cora Crafts mysteries and the Cumberland Creek mysteries. Her books have been selects as finalists for an Agatha Award and a Daphne du Maurier Award. She lives at the foothills of the Blue Ridge Mountains in the Shenandoah Valley, VA. You can find out more at http://molliecoxbryan.com/.

Posted by Joan Nienhuis at 8:44 PM