In Hot Water by Kate Kingsbury 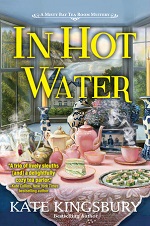 I generally enjoyed this cozy mystery. I appreciate the setting on the Oregon coast and the descriptions of the mountains in the distance. Vivian is a persistent amateur sleuth when one of her employees is suspected of murder. I like how Vivian and her two employees work together to solve the mystery. I was a little disappointed that the characters were not developed more deeply, this being the first novel in a new series.

The mystery plot is sufficient. It's a good thing the women are on the case as the police investigation seems to be dysfunctional. The women find out secrets about the town the detective should have been after. There were a couple of aspects of the plot I felt did not work. One was the clothing on the dead man and the other was that the hotel room was cleaned so early in the morning. That should have been a red flag to the detective who seemed to ignore it all together. And a clerk freely names the people who buy a certain product? And an escort woman freely names all her clients?

There is a little suspense at the end but otherwise the plot is slow but consistent. I would have liked more character development, a bit more difficult task to find the murderer and a police detective worth his salt.

Kate Kingsbury began her story telling in a bomb shelter during the London Blitz. She has worked as a receptionist, accountant, office manager, executive secretary, and restaurant salad maker. She enjoyed a short career on stage before she immigrated to the United States. She had her first book published in 1987. She and her husband live in Oregon. You can find out more at https://www.katekingsbury.net/.

Posted by Joan Nienhuis at 1:46 PM