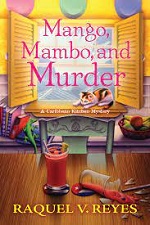 This cozy mystery was an introduction to a new profession and an interesting setting. I had no idea there was an academic profession of food anthropologist. Such a person studies how food, culture and history intersect. And that leads to the setting of Miami and the Caribbean culture there.

Miriam is the academic who becomes a presenter on a Spanish language food show. When the second person dies from ingesting something, perhaps from an herbalist, Miriam is on the case. An aspect of this cozy mystery I really appreciated is that the detective investigating the case actually asks for Miriam's help. I like that, rather than having an antagonistic relationship.

The mystery is pretty good for a debut fiction effort. The most interesting aspect of the book is the food, however. We are presented with a variety of traditional Caribbean foods and an exploration of ethnic shopping opportunities. Lots of recipes are included too. The one aspect of the novel I did not like at all was the Spanish. While I understand why characters spoke Spanish, I would have liked to know what was being said. It was a bit frustrating.

Raquel V. Rayes writes stories with Latina characters. Her Cuban-American heritage, Miami, and the Caribbean feature prominently in her work. She is the co-chair for SleuthFest. You can find out more at http://rvreyes.com/.