Home for Christmas by Various Authors 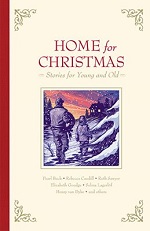 This is an interesting collection of short stories for the Christmas season. There are some well known stories like “The Other Wise Man.” There are some well known authors represented, like Pearl S. Buck and Madeleine L'Engle. There are a number of authors I have never heard of. They seem to be included in the collection because of the literary value of their work. Some of the stories are uplifting and touching while others are a bit dark. The settings of the stories show a broad range, from Europe to the Holy Land to Cuba to America. Included are original woodcut illustrations by David Klein.

There are a total of twenty stories included. They seem to be more literary in style than would normally appeal to contemporary children. Some were humorous while others were sort of dark and others ended abruptly and seemed open ended. I would certainly suggest reading each story first before reading it to a child. Some evangelical Christians may be surprised at the many stories involving (Catholic) priests, fathers and sisters. Some of the stories are not specifically about Christ's birth but do deal with general Christian principles, such as acceptance or kindness. I am sure some stories will be brought into family traditions while others may not be included.

It is a collection that was originally released in 2014 and has been reissued in hardcover this Fall.

You can read an excerpt of the first story and see the table of contents here.

You can read another story, The Legend of the Christmas Rose by Selma Lagerlof, here.

Posted by Joan Nienhuis at 8:51 AM