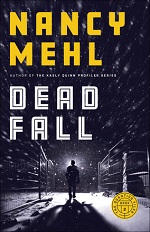 This is the second novel in The Quantico Files series by Mehl featuring members of the FBI's Behavioral Analysis Unit. They are the people who create a profile of the killer. This series focuses on Alex, the agent featured in the first book, Night Fall. (You can read my review of that book here.) Kaely Quinn is a co-worker of Alex and features prominently in this series. She has appeared in a previous series, Kaely Quinn Profiler. Her way of profiling is unique and to obtain the best experience of understanding her character, the series featuring Kaely should be read first.

The action in this novel is a bit different from typical ones featuring FBI agents. This novel sees the agents sequestered when it becomes evident someone is targeting members of their unit. Most of the plot centers on BAU agents sitting around a table reviewing information and then trying to create a viable representation of the killer. His method of killing is manipulating people to commit suicide so the evidence is slim.

I felt there was quite a bit of repetition as the team discussed yet again the little evidence and conjectured on the character of the killer. At one point Kaely says, “We're just going in circles.” Alex expressed my own feelings when she replied, “I feel the same way.” (2244/3808) Alex made a revealing comment a bit later. “Working a profile is boring, detailed work. Very repetitive.” (2263/3808) My thoughts exactly.

This is a novel for readers who like characters thinking about their past actions and current growth and possible future. Alex thinks much about who she is and who she wants to become. I really appreciated the Christian aspect of the novel as Kaely and Alex have some good discussions with the gospel clearly presented.

While this may be different from the FBI style plots I generally like, I did appreciate a good dose of suspense at the end as well as a twist I did not see coming at all. Mehl continues to create engaging novels centered on character development and I will be looking for the next in this series.

Nancy Mehl is the author of more than 40 books. She is a Christy Award and Carol Award finalist as well as the winner of an ACFW Book of the Year award. She writes from her home in Missouri where she and her husband live. You can find out more at www.nancymehl.com. Photo: Ginger Murray Photography.