Slashing Through the Snow by Jacqueline Frost 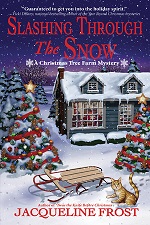 I liked the setting of this cozy mystery, a Maine family inn with lots of activities and yummy food for visitors around the Christmas season. Holly is an interesting heroine and female sleuth. A murder occurs. Holly's good friend is considered a prime suspect and Holly is on the case. Her boyfriend is the local sheriff and some tension arises when she pursues the truth, feeling perhaps the law might be ignoring some viable suspects. And suspects there are aplenty.

I liked the feeling of the community. One of the issues in the novel is the impact of a bad review by a magazine and I liked how people worked together to support each other. A toy drive is going on and the response is overwhelming. That's a nice community. And there are some interesting and quirky characters, like Cookie with her pet goat.

The resolution to the murder was a little out of left field, I thought. In the denouement, the sheriff reveals what he knows and it is much more than we readers know. I kind of felt like Holly when she said, “Would've been nice if you'd told me any of this earlier.” (2816/2986) There could have been more hints for us to have a better guess at the villain. This is the third in a series but reads well on its own.

Jacqueline Frost is the pseudonym used by Julie Anne Lindsey. She is an award winning author who writes in several genres. She has published more than forty novels since her debut in 2013. She is the mother of three and lives in Kent, Ohio with her husband. She also writes as Julie Chase, Bree Baker, and Julie Anne Lindsey. You can find out more at https://www.julieannelindsey.com/.

Posted by Joan Nienhuis at 6:35 PM