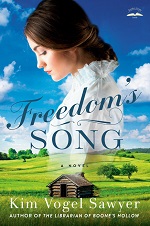 Sawyer's novel explores two kinds of slavery with the theme of freedom running through both. Fanny's father had signed an agreement while in Europe that provided the entire family be transported to America in return for their eldest daughter spending seven years on a riverboat, entertaining by singing. Fanny's experience on the riverboat was not a good one. She was held captive, locked in a small cabin on the lowest part of the boat. And it looked like she would never be allowed to leave. When disaster strikes the boat, she takes a chance for freedom.

The other kind of slavery is is that of Blacks. It's 1860 and some are escaping the south through an underground railroad. The path of an escaping family merges with that of the escaping Fanny for a time. 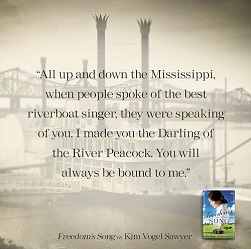 I liked the tension Sawyer provided as Fanny tried to live a new life of freedom while being pursued by Sloan, the riverboat captain. I really felt Sloan was an inconsistent character and his actions near the end of the novel were just too unbelievable. That made the resolution to the tension less than adequate. I liked the eventual setting of the freedom of being in the wide open spaces of homesteading.

The novel gives good insight into issues of the era, both indentured work and slavery. I did feel the plot was rather predictable and the ultimate action of resolution less than satisfactory. There is a good faith message included.

Kim Vogel Sawyer is a bestselling author with more than 1.5 million books in print in seven different languages. Her novels have earned the ACFW Carol Award, the Inspirational Reader's Choice Award, and the Gayle Wilson Award of Excellence. She lives in central Kansas with her retired military husband. She enjoys spending time with her three daughters and grandchildren. You can find out more at https://kimvogelsawyer.com/.