This is a delightful Christian romance. There are several themes running through the story, making it a romance with a little more meat on the frame. 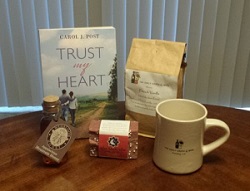 The plot is good. Grant is a rising New York lawyer who has just inherited his estranged grandmother's home in a small North Carolina town. He's ready to put the large home on the market and then take off for a much needed sabbatical. Until he meets Jami, new reporter for the local town newspaper. She's been assigned to do a story on him and his grandparents. Her aim is to solve the mystery behind the decades old change in the couple, going from socialites to recluses. When she meets Grant, her heart realizes he is more than she bargained for.

The romance part of the plot is well done. I liked it. There were also other aspects of the novel I liked too. There is much character transformation that must happen in both Jami and Grant before a romance can blossom. Jami's father had abandoned his family when Jami was eight. She still fears abandonment by men. Grant had been convinced his grandparents hated him as he had never met them. In their house he finds evidence to the contrary, however. Had his mother lied to him all these years?

So there are serious issues which the main characters need to face and conquer. It is tough going. Lack of trust on both their parts makes for misunderstandings and hurtful situations. Only God working within can heal old hurts, bring forgiveness, and make a way for a good future.

Post has given us some support characters that are great. Bernie, an older reporter for the paper, is quite the character. She is always trying to make romance happen between others. She and Hank, the older manager of the local hardware store, always seem to be at odds. Until, that is, Jami and her friends turn the tables on Bernie and set her up for romance.

I recommend this enjoyable romance. There are good characters with great character development. There are a few good themes to think about and discuss. And readers will get to enjoy the great outdoor scenery of North Carolina.

I am taking part in a blog tour of this book. You can find other reviews here.

Carol J. Post has been a medical secretary, court reporter, property manager, and owner of a special events decorating company. Through it all has been her love of writing. Her books have been nominated for an RT Reviewers' Choice Best Book Award and selected as an RT Top Pick. She and her music minister husband have two adult daughters and several grandchildren. You can find out more at http://caroljpost.com. You can follow her on Twitter and Facebook.

Waterfall Press, 272 pages. You can purchase a copy here.

I received a complimentary digital copy of this book through Litfuse. My comments are an independent and honest review.
Posted by Joan Nienhuis at 6:04 PM