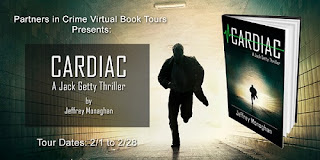 Embattled CEO Jack Getty is nervous. This is his final chance to save his company. He is announcing his firm's breakthrough discovery at the world’s largest annual biotech conference. A discovery that trials show will extend human life by 75%. But as Jack approaches the podium, he suffers a major heart attack and collapses on the stage, stunning the conference attendees.
Jack is rushed to the emergency room where surgeons implant the latest Wi-Fi enabled pacemaker, saving his life in the process. What Jack doesn’t know, however, is that an underground hacking group has its sights set on manipulating his “secure” pacemaker to get information only he can provide. Despite the hackers unrelenting terror, Jack refuses to give them what they want and soon starts to uncover the true motives of this mysterious and powerful group.

This is the most captivating novel I have read in some time. The novel started out with a bang and the action never stopped. The twists and turns in the plot kept me pushing to the end.

This novel portrays the kind of nightmare no one wants to go through. Imagine having the latest wi-fi reporting pacemaker inserted in you only to find that someone has control over it. They want information from you and can torture you until you give in to their demands.

I really like Monaghan's writing style. Even though the scenes were action packed the writing was not over done. That made the whole novel seem very realistic and very readable. The characters were well drawn. The villains really come across as nefarious. Jack, on the other hand, is a likable hero. I hope there will be more featuring him.

The plot is well thought out and tight. There were no unnecessary scenes nor long character ruminations to slow down the action. The plot was not perfect as I felt there was another person in the company who could have very easily provided the information the bad guys wanted. But, other than that, an exciting novel that kept me avidly reading to the surprising end.

I recommend this novel to readers who enjoy a captivating plot and writing style.

Jeffrey Monaghan is a Silicon Valley executive with an unhealthy obsession for technology. He grew up in Southern California and currently lives in Portland, Oregon with his wife and two children. Cardiac is his debut novel.

Check out the participants on this tour! Visit their sites for giveaways, reviews, interviews, guest posts, & excerpts!
Click here to view the 'Cardiac by Jeffrey Monaghan' Tour Participants

I received a complimentary egalley of this novel through Partners in Crime Virtual Book Tours. My comments are an independent and honest review.

Posted by Joan Nienhuis at 5:59 AM