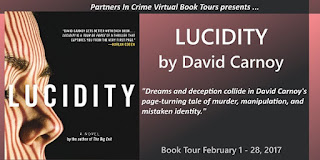 After his “gripping thriller debut” (Kirkus) Knife Music and sophomore “page turner” (Examiner.com) The Big Exit, David Carnoy’s Detective Hank Madden returns in this bicoastal caper that pits dreams against reality, where nothing can be taken at face value.

Twenty years after the unsolved case of Stacey Walker’s disappearance went cold, a Silicone Valley executive hires the retired Menlo Park Police Detective Hank Madden to find her body and track down her missing husband, the prime suspect in her unsolved murder. Four months later, author Candace Epstein is pushed in front of a car near Central Park. Her editor Max Fremmer becomes entangled into the investigation of her attempted murder, though he is adamant that he is uninvolved. As he digs into Candace’s background to clear his own name, Fremmer grows suspicious of his client’s connection to a nefarious institute for lucid dreaming on the Upper East Side and its staff whose stories never seem to add up―all while an unexpected link emerges to Detective Madden’s investigation in California.
As similarities arise between the cases on each coast, Detective Madden and Fremmer forge an unlikely partnership to expose what misconduct lurks beneath the façade of the Lucidity Center―but can they unravel the secret that links their investigations together in time, or are they only dreaming? Carnoy’s Lucidity stuns with complex detail that will keep readers guessing until the final, satisfying jolt.

I really liked this novel. The plot is very clever, very well thought out. There were twists at the end, as well as along the way, that kept me actively thinking about the cold case and its possible resolution. A red herring showed up here and there too. That the action happens in two places was deftly handled. The narrative alternates between California and New York but in a systematic way so I was not confused.


The characters were well crafted. Madden came across as a real person. He had been successful as a detective but now retired lacked the focus to write his memoir. He was prime for working a cold case when approached. Fremmer came across as one of those New York City guys who tried to work all the angles.

I always appreciate learning something when I read a novel and this time it was about lucid dreaming. Some of the dream descriptions were a little too graphic for me in their sexual nature but otherwise, reading about them was interesting.

I recommend this novel to those who like a well planned out plot with lots of action. There is a graphic sex scene, part of a lucid dream, but other than that I found the novel entertaining and an enjoyable one to read. I'll be watching for more from this author.

THE FIRST CALL CAME IN AT 6:08 AM.
“Send an ambulance to Central Park West and 75th,” a male caller said in an eerily measured voice, as if arranging a ride to the airport. “Someone just got hit by a car. There’s a body in the middle of the street. I can see it from my window.”
“OK, sir,” the 911 dispatcher responded. “Let me make sure I heard you correctly. You said someone was hit by a car?”
“Yes.”
“How long ago did this happen?”
“Like fifteen seconds ago.”
“Did you see it happen?”
“No, I heard it. Get some paramedics here quick.”
The line went silent.
“An ambulance and the police are on the way,” the dispatcher said after a moment. “Can you tell me what you heard, sir?”
“I heard a screech of tires and a kind of thud. Now this woman is standing outside her car screaming. It’s a BMW 3-series.”
“You hear screaming now?”
“The woman who hit the person is screaming. I can see the whole thing. I’m on the third floor. Hold on, I’m going to take some pictures.”
Another short silence.
“Sir, are you still there?”
“Yeah. She’s totally freaking out. You’ve gotta have more calls coming in.”
They did. Another dispatcher was speaking to a woman who lived on the eighth floor of the same apartment building. And a third caller, who identified himself as a doorman, sounded distressed.
“It looks bad, man,” he said. “Tell them to hurry.”
The first calls came mostly from the north tower of the fabled San Remo, a hulking twin-steepled architectural gem that dominated the western skyline over Central Park. The San Remo was one among many grand pre-war co-ops along Central Park West, the West Side’s so-called “gold coast.” But it was also grander than most. It even had its own Wikipedia page that included a list of celebrities—past and present—that owned apartments there.
The only eyewitness to the accident, a runner on her way into the park, reached a 911 operator a full five minutes after the first caller.
A little breathlessly she explained that she’d just seen a woman get pushed in front of a car.
“I’m sorry I didn’t call sooner but I didn’t have my phone with me. I had to borrow someone’s.”
“That’s OK,” the dispatcher said. “Have you spoken to any police officers yet?”
“No, they’re trying to keep everyone away from her. The ambulance just got here. The paramedics are working on her. There’s a lot of blood. My God, I hope she isn’t dead.”
“OK, I need you to stay there and give a statement to a police officer. They need to know what you saw. But I also want you to tell me what you saw and I’ll make sure they get it.”
The NYPD had a smattering of high-resolution cameras in and around Central Park, but none near the intersections of 74th or 75th and Central Park West; the closest was a block south at 73rd. The San Remo, however, had its own security cameras and one of them did record the accident. The grainy video would support what the jogger told the dispatcher:
“This guy, he looked like a homeless guy, came up to her while she was in the crosswalk,” she said. “She was walking her dog. He was slightly behind her to her right. She looked over at him. I don’t know if she said anything or not. But suddenly he lunged forward and pushed her into the street just as a car was coming.”
The vehicle’s front bumper struck the woman just below the knees, taking her legs out from under her. She rolled up onto the hood, ricocheted off the edge of the windshield and corkscrewed gymnastically in the air. Her right hand hit the pavement, followed by her hip and torso, and then her head, face-first. One of her shoes came off and her cell phone skittered across the street, all the way to the other side, where it was found resting next to the back tire of a parked car, the screen cracked but otherwise operational.
“I went over to help,” the jogger said, her voice wavering. “I didn’t know what to do. I’d never seen anything like that. There was so much blood. It was coming out of her ears.”

While David Carnoy lives in New York City with his wife and children, his novels take place in Silicon Valley, where he grew up and went to high school (Palo Alto). His debut novel, Knife Music (2010), was a Top-10 bestseller on the Kindle and also a bestseller on the Nook. More medical thriller than high-tech thriller, to research the novel Carnoy spent a lot of time talking with doctors, visiting trauma centers, and trailed a surgeon at a hospital in Northern California to help create the book's protagonist, Dr. Ted Cogan.
The Big Exit (2012) isn't a sequel to Knife Music per se. However, a few of the characters from Knife Music figure prominently in the story. His second novel has more of a high-tech slant and reflects Carnoy's experiences as an executive editor at CNET.com, where he currently works and is trying resolve his obsession with consumer electronics products. He went to college at Wesleyan University and has an MFA in creative writing from Columbia University.


Click here to view the 'Lucidity by David Carnoy' Participants

I received a complimentary digital copy of this novel through Partners in Crime Virtual Book Tours. My comments are an independent and honest review.

Posted by Joan Nienhuis at 5:59 AM