Sailing Out of Darkness by Normandie Fischer 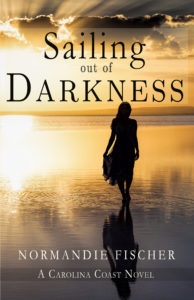 Love conquers all? Maybe for some people.

When Samantha flies to Italy to gain distance from a disastrous affair with her childhood best friend, the last thing on her mind is romance. But Teo Anderson is nothing like her philandering ex-husband or her sailing buddy, Jack, who, despite his live-in girlfriend, caught her off guard with his flashing black eyes.

Teo has his own scars, both physical and emotional, that he represses by writing mysteries—until one strange and compelling vision comes to life in the person of Sam. Seeking answers, he offers friendship to this obviously hurting woman, a friendship that threatens to upend his fragile peace of mind.

But not even sailing the cobalt waters of the Mediterranean can assuage Sam’s guilt for destroying Jack’s relationship and hurting another woman. Soon the consequences of her behavior escalate, and the fallout threatens them all.

Sailing out of Darkness is the haunting story of mistakes and loss…and the grace that abounds through forgiveness. Awarded: Aspen Gold, Selah, and Maggie Finalist 2014 (1st edition)

I appreciated this extended character study of a troubled woman, hurt by divorce. It reminded me again that people should not make major decisions until they have distanced themselves from the hurtful experience. We see that Sam had made a huge mistake because she was in a vulnerable situation after her divorce and ripe for an affair.

Sam's guilt is a major aspect of this novel. Because of it, she does not feel she deserves to have a loving relationship again. Much of the book is about Sam and her feelings in this area. I felt some of it was repetitive. I was disappointed that Sam did not really confess her sin to God and experience His forgiveness. There was a great opportunity for that in the book and it would have made Sam a fresh person in her own eyes too, and open to a new life with a loving spouse.

I was a bit troubled by Teo's character. I did not like his pursuit of Sam so quickly after her ending her affair. He managed to refrain from causing harm to Sam but I do wish he would have given Sam time to truly heal from her previous hurts and come out of being in another vulnerable situation.

While God is mentioned in the book, Christianity is not a vital aspect of the character's lives.

Those who enjoy sailing would appreciate the many water adventures included. There is a good amount of well described travel in Italy that readers will enjoy as well.


In Sailing out of Darkness, the female protagonist longs for something, anything that will validate her after her husband leaves. She’s propelled into such an emotional wasteland that she becomes vulnerable to what seems a safe friendship.

It isn’t. And so she flees to Italy, but the repercussions of her actions continue to affect her and others—as consequences are wont to do.

After my divorce, hurting women seemed to flock to my vicinity. (Either that, or suddenly husbands in the church were leaving in droves.) These were abandoned women, angry women, women searching for love in the wrong places. I wasn’t in any shape to minister to them as I too was struggling at the cross, but that period helped me understand how woefully ignorant and unprepared many church goers are when it comes to hearing the cries of the hurting. I know of two women (to whom I dedicated the book) who actually killed themselves because no one listened or reached out a hand when they needed it.


The process of divorce and healing taught me about grace in a way that I’d never fully internalized. I’d ministered and counseled for years about the Love of God. I’d preached and written about it, but part of me, the part that needed healing, still held on to the idea that I had to be perfect to be loved by God and by man. I knew better, but the heart and the head weren’t working well together, especially during my years of living with an alcoholic husband and during divorce recovery after he left. As I wrote about Sam’s guilt and helped her find peace, I think new pieces slid into place for me as well. Nothing, absolutely nothing, can separate us from the love of God. And that’s probably the most powerful message we have to share with this hurting world.

I received a complimentary egalley of this book through Celebrate Lit. My comments in the review section are an independent and honest review. The rest of the content of this post was provided by Celebrate Lit.
Posted by Joan Nienhuis at 6:28 AM