Out of Darkness by Erynn Newman

Elisabeth Allen gave her heart to Jesus as a little girl and to Drew Marek as a teenager. When their wedding day finally arrives, it’s the happiest day of her life–until a car bomb transforms her dream come true into a living nightmare.

As Best Man at the wedding, Gabriel Di Salvo promises Drew–his best friend and CIA partner–he’ll look after Elisabeth, but he never dreams it will become necessary so soon. As Elisabeth struggles to put the pieces of her life back together without Drew, Gabe becomes her rock, and as they share their grief and begin to heal, their friendship gradually deepens into something more.

Three years later, Gabe and Elisabeth are planning a future together when he receives a shocking call from the one man who can upend his happiness: Drew. Suspecting someone at the CIA is behind his abduction, Drew refuses to come home. Instead, he asks Gabe to bring Elisabeth to him. Now Gabe just has to figure out how to let her go.

Drew and Elisabeth race across Europe, dodging international arms dealers and attempting to reclaim what was stolen from them. But years of captivity and torture have left their mark on Drew. He is no longer the same boy Elisabeth fell in love with, but he is still her husband, and she’s determined to build something new and leave her relationship with Gabe in the past, if her heart will get the memo.

When their enemies close in and the threat of a terrorist attack escalates, Gabe may be the only person they can trust. Drew, Elisabeth, and Gabe are thrown into a fight for their lives–one that will test their loyalties to God, country . . . and each other.

This is a good debut novel. It emphasizes character development yet is interspersed with action and suspense. I read the prequel and I really like the intense love Elisabeth and Drew have for each other. It was very interesting to see how Elisabeth handled it when Drew was suddenly gone from her life. She struggled with letting go of his place in her heart, even years later.

Drew was struggling too, to stay alive and sane in the midst of torture and other mistreatment. Even when Drew manages to escape, he knows there is a traitor in the CIA. He and Elisabeth are not safe. There was plenty of action included as Drew and Elisabeth try to stay one step ahead of those who want him dead.

I recommend this novel to those who enjoy a good deal of suspense woven into a story of love and commitment. You'll find a clear message about saving faith in Jesus Christ and how that changes a life. 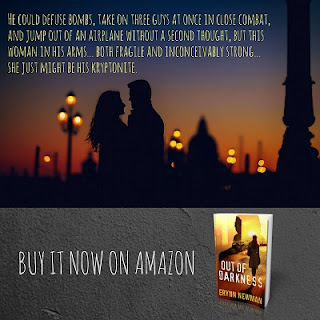 Erynn Newman is a pastor’s kid, raised in churches all over the Eastern Seaboard. Since earning her degree in Christian Studies, she has traveled the world and served as a missionary, a counselor, an ESL teacher, and a nanny. Though she has never worked with the CIA, her DVR contains a veritable Who’s Who of international spies. She is a Carolina girl, a wife, and Mama to a very busy little boy, two cats, and a gaggle of characters that live inside her head.


20 Facts About Out of Darkness