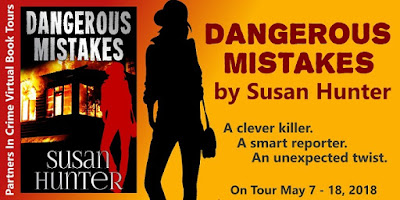 A clever killer. A smart reporter. An unexpected twist.

Small-town reporter Leah Nash investigates a murder no one else believes happened—until a second death signals the killer's first mistake. Nothing is as it seems, and the twisting trail she follows pits Leah against her police lieutenant best friend, her new boss, and even her mother. Still, the smart and smart-ass Leah can't back down. If she's right, she can save someone she loves. If she's wrong, the next victim could be her.
Independent, intrepid and irrepressible Leah Nash can't resist a good story, especially not one that ends in murder. Sharp dialogue, plots that move and storylines full of unexpected turns make this series a fan favorite.


I am thoroughly enjoying these Leah Nash mysteries. It's because Leah is a character that Hunter has crafted well. Leah is so strong willed, she spurns warnings and gets herself in danger. She is not satisfied with the quick investigation by the authorities in this novel. She is determined to find the truth and I so like that about her. Leah is quick tempered but she is also pretty quick to offer an apology. She is a feisty investigative reporter and a good, if flawed, heroine.

I like that the novel has Leah's point of view. We find out information as Leah does. I like that Hunter provides hints and clues within the plot, as well as a red herring or two. I like the good balance between the narrative of Leah's private life and the ongoing investigation into the murder.

This is the second book in this series I've read. You can read my review of Dangerous Habits here. This novel builds a little on the first one but it would be a fine read on its own.

I recommend this novel to readers who enjoy a well crafted character driven mystery. I look forward to reading the next in the series.

Visit the other great hosts on this tour for more great reviews, interviews, guest posts, and giveaways!
Click here to view the Dangerous Mistakes by Susan Hunter Participants