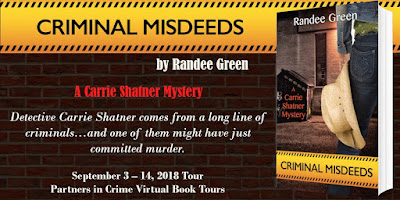 As far back as the Shatners can be traced, they have been breaking the law and running from it. It's a family tradition. Now Carrie Shatner is a detective and crime-scene technician with the Wyatt County Sheriff's Department in Eastern Texas. Over the years, she has tried to distance herself from her family's criminal activities. But that is easier said than done.
The Shatner family is celebrating New Year's Eve at the Wyatt County Fairgrounds in their usual style: illegal fireworks, homemade moonshine, and a near brawl. After shutting down the party, Carrie does a final sweep of the fairgrounds and finds a dead body in a dumpster.
Good news: the dead man is not a Shatner. Bad news: the Shatners are now suspects in a homicide investigation. Soon the fairgrounds are overrun with law enforcement, including Sergeant Jerrod Hardy, a Texas Ranger. The victim is Kyle Vance, Carrie's ex-boyfriend and a member of the Palmer family, who have been feuding with the Shatners since the Civil War.
Despite serious misgivings, Hardy allows Carrie to help him investigate. He knows she physically couldn't have beaten Vance to death, but he wonders if she is covering for a family member.


Crazy is about the only way I can describe this book. Carrie is a kick. She seems to be the only honest wanna be among a family of petty criminals. She tries hard to keep her family in line while working for the sheriff. There were times I laughed out loud.


And southern. This novel just drips southern culture. The men are sort of like what this Pacific Northwestern native always imagined sex craved southern men to be. Carrie is a brave gal, holding her own among the macho men, even at the disgusting strip joint. Yes, there were some vulgar parts to this novel. No worse, I suppose, than reality.

There's a good mystery in the midst of all this craziness too. Wacky characters, a family feud, an immersion in deep southern culture, and a mystery. A good read for someone who appreciates all that and doesn't mind the vulgar parts.

I come from a long line of criminals.
Moonshiners, rumrunners, and drug dealers. Horse thieves and carjackers. Bank robbers, burglars, pickpockets, and con artists. And then there has been the occasional killer. You name it, whether it’s a felony or a misdemeanor, somewhere along the line a member of my family has committed it.
As far back as the Shatner family could be traced – from southern England to the mountains of western North Carolina, and now to the Piney Woods of East Texas – we had been breaking the law. And running from it, too.
It was a family tradition.
You see, the Shatners have never swum in the baby pool of life. We’ve always been out in the deep end, and we jumped in headfirst.
As for me, every day I fight my genetic predisposition to break the law. Some days I’ve been more successful than others. You see, I can’t break the law when I’m the one who is supposed to be upholding it.
My name is Carrie Shatner, and for the last three-and-a-half years I have worked as a detective and crime scene technician for the Wyatt County Sheriff’s Department in East Texas. That would put my Bachelor of Science in Criminal Justice from Sam Houston State University to good use except there wasn’t a whole heck of a lot of serious crime in Wyatt County. I mainly sat behind my desk all day, twiddling my thumbs, playing Sudoku, and keeping up with my various social media accounts.
While my official job was to process crime scenes and deal with all parts of criminal investigations, my unofficial job was to cover up my family’s illegal activities and keep them out of jail. I’d be the first to admit that what I have been doing wasn’t ethical. It was probably also criminal. I tried not to think about that too much. To be honest, I tried not to think about any of it too much. Most days I felt like quitting my job. Family obligation prevented that.
I’m not saying that all of the Shatners have been hardened criminals. Sure, most of the older ones were. But at least some of the younger ones shied away from the family business and seemed to be sticking to the straight and narrow. And they were the reason why I do what I do. Yes, I clean up the crimes of the guilty. But I do it to protect the innocent.
These days, the laws my various family members break have been fairly minor ones. Okay, some were still kind of major. But it was nothing compared to what we used to engage in. I mean, I’m pretty sure we were no longer involved in contract killing or organized crime.
What I did know was that my great-uncles had a moonshine still out in the woods and a marijuana crop concealed in a bunch of old Cold War bomb shelters. Every time I caught one of my family members selling the homebrew or the pot, they would promise me it was the last time. I didn’t believe them. I didn’t arrest them either, because I knew it wouldn’t stop them. It would also infuriate the rest of the family. And, while tempting, that wasn’t a risk I was quite willing to take. At least not yet.
Occasionally, one of the younger Shatners would steal a car or deface some public property or get busted for underage drinking. The older Shatners were always getting nabbed for public indecency and public intoxication. Some of them were also heavily involved in insurance scams. And then there had been the occasional assault. But we hadn’t killed anyone – accidently or on purpose – in years. Or, if someone had, I didn’t know about it.
When you got down to it, the majority of the bad things that the Shatners have done were just plain dumb. And, as far as I knew, being stupid wasn’t illegal. We would have been in serious trouble otherwise.
I don’t want you to go into this thinking that all of the Shatners were bad people. Most of them have just been a little misguided.
At least that’s what I kept telling myself.
Until I found the body.
***
Excerpt from Criminal Misdeeds by Randee Green. Copyright © 2017 by Randee Green. Reproduced with permission from Randee Green. All rights reserved.

Randee Green's passion for reading began in grade school with Little House in the Big Woods by Laura Ingalls Wilder. She has a bachelor's degree in English Literature, as well as a master's and an MFA in Creative Writing. When not writing, she's usually reading, indulging in her passion for Texas country music, traveling, or hanging out with her favorite feline friend, Mr. Snookums G. Cat.


Visit these other great hosts on this tour for more great reviews and giveaways!
Click here to view the Criminal Misdeeds by Randee Green Participants.