Mandela and the General by John Carlin Illustrated by Oriol Malet

I think this may be the first graphic novel I have read. I was impressed by the impact of combined text and illustrations.

This book gives readers a sense of the tension South Africans were experiencing in the mid-1990s. Mandela had been released from prison in 1990 and the first post-apartheid elections were set to take place in 1994. The whites feared reprisal and made ready a militia. A retired general from the South African military, Constand Viljoen, was asked to lead them. 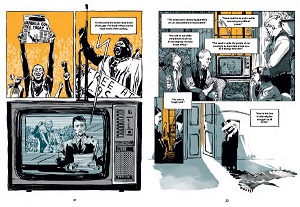 As the book vividly portrays, it looked like violence would ensue. Mandela proposed meeting secretly with Viljoen. How those two would interact would set the stage for the future of South Africa.

I recommend this book to readers as a good way to get insights into the time of transition for South Africa. The text gives the flavor of the feelings of those involved. The illustrations are great, adding an impact one could not experience with text alone. This was a deadly time and some of the illustrations portray murderous scenes. A timeline has been included at the end of the book as well as a short historical vignettes of Mandela, Viljoen and their interaction.

John Carlin was South Africa correspondent and bureau chief for the Independent of London from 1989 to 1995. He interviewed Nelson Mandela and Constand Viljoen and was present during many of the events described in this book.

Oriol Malet is a Catalan artist whose illustrations regularly make the cover of Spanish magazines.

I received a complimentary digital ARC from the publisher. My comments are an independent and honest review.
Posted by Joan Nienhuis at 2:00 PM