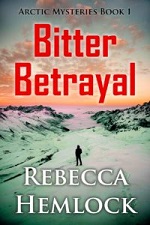 Scientist Luke Wilkins has always been one step ahead of Lee, his longtime rival. Luke and his best friend Josh start off on an expedition to Nunavut’s territory for an environmental study. All seems well until their plane crashes in the middle of nowhere. As Luke regains consciousness, he discovers that he’s being held prisoner by Lee and his men.

Luke has something that Lee wants. A ring that has been shrouded in mystery for centuries and Lee will do whatever it takes to get it. Luke fears that he will never see his family or friends again unless he hands it over.

Lee will stop at nothing until the ring is his, but would he go as far as murder?

Hemlock takes readers on an adventure to snow covered northern Canada. The novella got off to a bit of a confusing start for me and I would have liked a more detailed initial setting, explaining why Luke and his crew were in that area in the first place. There is almost a fantasy concept to the novella with an ancient Viking castle at the remote location. I would have also appreciated earlier back story about Lee and the extended rivalry between him and Luke.

Hemlock's writing style is straight forward and easily comprehended. There were a few issues I had with the plot. One was about who possessed the ring. At the end of Part I, the chief definitely had the ring. The chief is very clear the ring does not belong to Luke. Imagine my surprise at the beginning of Part II, when Luke has the ring. We are not told how he got it back. Also, in Part II, Josh has a pistol. (897/1092) How could that be when their luggage was stolen? Pistols cannot be carried onto the airplane so did he buy one that morning? Can one buy a pistol so quickly in Norway? Later Luke references “weapons.” (974/1092) Did both Luke and Josh somehow get pistols?

The Christian aspect of this novella is minimal. Luke does mention thanking God but when in dire straits, there was nothing about praying to God or trusting Him for safety.

This novella contains two vignettes that really didn't feel like complete short stories. We are left at the end of the novella no closer to a resolution to the adventure so a sequel is required to reveal more about the ring and its meaning.

Rebecca Hemlock has written stories her entire life. She always knew she wanted to be a writer. That dream became a reality for her in 2016 when she landed her first job writing for her local newspaper. That same year, she was able to publish a children’s book under the pen name R.C. Burch.  With a little help from some wonderful people, Rebecca  was able to move forward in her writing career.

Rebecca published two more children’s books the following year, but children’s fiction was only the beginning. She self-published a novella in 2019, titled Bitter Betrayal, Arctic mysteries,  and completed her first novel in 2020. When she is not writing, Rebecca enjoys traveling, reading, and spending time with family.

This book was so much fun to write. There are so many places in this world that have been barely touched by man. I took an interest in Northern Canadian culture after watching a documentary about how the Vikings first settled there.

After reading through the different artifacts that have been found there, Bitter Betrayal was born. I knew this would make a tremendous mystery-suspense story. Whenever I start a Mystery Suspense book, I usually like to add a dash of romance with a historical twist.

Luke Wilkins is someone that most single dads can relate to. He has a difficult time trusting other people. Especially when it comes to his son, Adam. He must trust those around him if he’s going to stay alive.

Bitter Betrayal teeters on the concept of how far someone would go for what they want. If you love Clive Cussler as much as I do, then this Novella is for you.

Through the Fire Blogs, April 5

Because I said so -- and other adventures in Parenting, April 7

For Him and My Family, April 14

Thank you for sharing your honest review!

This sounds like a good read. Thank you for your review.

That type of grammar mistakes bugs me, too.