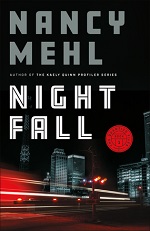 Now that Alexandra “Alex” Donavan is finally free of her troubled upbringing, she's able to live out her childhood dream of working for the FBI. But soon after she becomes a member of the FBI's elite Behavioral Analysis Unit, authorities in Kansas and Missouri contact them about bodies found on freight trains traveling across the country–all killed in the same way.

Alex never expected to be forced to confront her past in this new job, but she immediately recognizes the graffiti messages the killer is leaving on the train cars. When the BAU sends her to gather information about the messages from her aunt in Wichita, Kansas, Alex is haunted by the struggles she thought she'd left behind forever.

In a race against time to solve the case while battling her own weaknesses, Alex must face how far she'll go–and what she's willing to risk–to put a stop to the Train Killer.

This FBI suspense novel revolves around several psychological issues. The main characters, Alex and Logan, are with the behavioral unit of the FBI. They would generally provide a profile of the villain. In this novel, the identity of the villain is soon known so they work on understanding his actions and character with a view to preventing further murders. Another area of psychological exploration is cult involvement. Alex had been exposed to a weird cult as a teen. While she had escaped that situation, it all comes back on her when she realizes their villain is a member of that same cult. Alex also has PTSD from teen experiences she is still trying to manage.

Another deeply explored issue is the relationship between Christianity and cult belief. We find out how cults can begin and generate associated literature. Cult beliefs are frequently contrasted to beliefs of Christianity in this novel. There is a very clear Christian message included. It is not subtle as the gospel is explained several times.

Another interesting aspect of the plot is the possibility of killing many with an airborne virus. That is a timely subject as the world is still in the midst of fighting a pandemic.

While most of the novel deals with psychological issues, there is some suspense. I was a bit disappointed when the suspense was prefaced by a thought of Alex. “This might be the dumbest thing she'd ever done.” ((3332/3990) No surprise suspense followed. There are some good twists near the end and a revelation that was not surprising.

This is a good novel for readers who like an FBI plot centering on profiling and other psychological issues. I liked it and will be looking for the next in the series.

Four murders. Only a week or two between each one, and they all look random. Nothing about the victims is similar—as if our UNSUB is selecting whoever is in the wrong place at the wrong time. Three men, one woman. Two Caucasian, one Black, and one Hispanic. Three of them younger, one in his seventies. All the bodies were discovered on trains and were stabbed multiple times.”

They could hear him take a deep breath before going on. “Unusual tags on the outside of the boxcars. Something like Bible verses, but we’ve searched several Bible apps to find them, and they’re not in any version we could locate. We’re not sure what the UNSUB is trying to tell us. He signed his work, but we have no idea what the initials TM mean. His name? Or something else?”

There was a slight pause. “I’m sending you some photos of the tags right now, along with everything else we’ve got, which isn’t much. We don’t have any real evidence. This guy is careful . . . and smart. At this point, we’re not in charge. He is. Have your team look over this information before they get here, okay? I’ll expect them at the command post in the morning. We’re setting it up now. Does that work for you?”

“They’ll be there, Stephen. Talk to you soon.”

The call done, Jeff turned on his laptop and pulled up the information Barstow had just emailed. He sent the file to a large screen on the wall and began slowly clicking through the photos.

In mere seconds, Alex felt like all the blood in her body had frozen, as if time itself had come to a halt. Her mind couldn’t seem to process what she was seeing.

How could this be happening?

Nancy Mehl is the author of more than 40 books and a Christy Award and Carol Award finalist as well as the winner of an ACFW Book of the Year award. Her short story, Chasing Shadows, was in the USA Today bestselling Summer of Suspense anthology. Nancy writes from her home in Missouri, where she lives with her husband, Norman, and their puggle, Watson.

I received a complimentary egalley of this book through Partners in Crime Virtual Book Tours. My comments are an independent and honest review. The rest of the copy of this post was provided by Partners in Crime Virtual Book Tours.
(My star ratings: 5-I love it, 4-I like it, 3-It's OK, 2-I don't like it, 1-I hate it.)
Posted by Joan Nienhuis at 5:53 AM

This one does sounds really good to me! Haven't had a chance top read it yet, but it is on my wish list1 Thanks for the review!