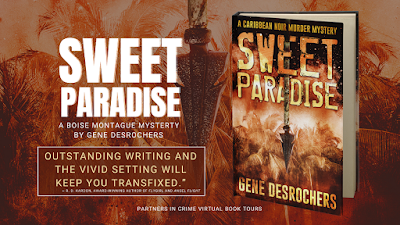 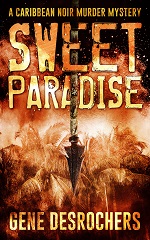 In this harrowing Caribbean noir murder mystery, we meet Private Investigator Boise Montague, a man on the brink who is trying to get his life together after his wife died. He has returned to his childhood home and he’s started a private investigator firm of one. Since returning, his drinking has accelerated and he needs clients desperately before the life insurance money dries up.

Enter Junior Bacon, grandson of Francine Bacon of the Bacon sugar and rum empire. Granny’s gone missing and Junior wants Boise to figure out what happened.

As Boise delves into the mystery of the missing matriarch, a reporter associated with her winds up dead in his new office, dramatically raising the stakes. Now Boise must contend with questions from the police, the newspaper president, and the reporter's widow.

As Boise investigates he uncovers surprising truths about a woman seeking redemption, a family on the brink, and why no matter how hard we try, the past can sometimes never be fixed.

In the end, Boise must not only confront a killer, but the island's dark history and his own inner demons.

“Boise Montague, intrepid St. Thomas, V.I. private investigator, returns in SWEET PARADISE. Talented author Gene Desrochers delivers a suspense-filled tale overflowing with duplicitous characters and greed-driven agendas in lushly authentic Caribbean environs. A mature generation is determined to hold tight to the empire that provides them with every luxury, while the next generation attempts to fulfill its dreams … Others will compromise all that is decent. And Boise Montague will do what he does best as he separates the winners from the losers and the innocent from the guilty. A 5-star read.”
--Laura Taylor - 6-Time Romantic Times Award Winner

“Boise is back! Gene Desrochers returns his readers to the island paradise of St. Thomas. You’ll feel the warm tropical breeze as Private Investigator Boise Montague must discover [what happened to] the matriarch of a wealthy island rum producer. The deeper he digs, the closer he gets to his own mortality. Wandering and sometimes stumbling through his investigation, Boise learns about family secrets—and they could kill him. Outstanding writing and the vivid setting will keep you transfixed.”
--R. D. Kardon, award-winning author of Flygirl and Angel Flight

This is the second novel in a series but reads well on its own. You can read my review of the first book, Dark Paradise, here. This series is a good addition to the noir mystery genre, with a hero I love to dislike. Boise is just about everything I would not want in a PI. He drinks way too much and then hurls or passes out. He solves mysteries the island way, by drinking lots of beer and bumbling his way into suspenseful situations, needing to be rescued and finally finding the murderers. Yet, underneath it all, he has a certain moral character.

The strength of this series is the setting. The hap-hazard work Boise does seems to fit the island culture. There are a bunch of quirky island characters. And we get a bit of an exploration of the sugar plantations and their use of slaves years ago and the idea of reparations.

This novel is not for readers of cozy mysteries. There is just too much murder and mayhem and poor behavior. For those who like a dark mystery set in a dark paradise, this is the book to read.

The first coat was drying. More droplets of sweat rivered between my shoulder blades as I slugged water and Guinness alternately. Two in the afternoon was no time to be painting in the October heat, but I didn’t know what else to do and sitting around worrying about my looming penury seemed pointless.

The used old-timey clock radio I’d picked up at Bob’s Store babbled on about hurricane warnings as reception fizzled in and out. It was the latter part of hurricane season and we’d seen minimal storm damage in the region. We might dodge hurricanes for one or two years running, but it was never long enough to truly get complacent about them the way places like New Orleans had.

The overhead fan whirred. Outside my door sunlight filtered thinly through a cloud, illuminating the traffic circle a faint ocher. As I considered the faded lines denoting parking spaces and the cracked pavement, a young man bobbed into my line of sight. He was one of those people who walked on his toes at all times, like the tendons in his calves were so tight his heels couldn’t touch the ground for more than an instant before popping up again. He squinted at the building, turning his head back and forth, then perusing a sheet of paper clutched in both hands. A green Osprey backpack hung loosely off his shoulders. People in California used them for hiking. He tugged at the built-in sippy straw and sucked. The bubbly slurping of the last drops of water in his pouch filtered up to me. Disappointment clouded his face.

His attention snagged on my door. I grinned and gave myself a mental pat on the back. He shifted one hand to his hip and gave a slight lean. I wasn’t sure whether I should let him see me in my ratty painting outfit, but figured that could be explained by the wet door. A spooge of cantaloupe paint dominated the center of my gray t-shirt. I eased the door open a couple more feet.

“Nice door.” He pointed at his forehead and swirled his finger around. “You got some.”

He was college-aged and his face was sunburned, as were his arms. He wore a Hawaiian shirt and khaki pants, a classic tourist outfit.

He continued to stand in the same spot, squinting and considering the sheet of paper. I returned to my inner office, needing another sip of water and the breeze from the fan. Out my open doorway, I could barely make out the top of his Caesar-style haircut.

“You should get a hat!” I hollered out.

His head rose up from the paper and he pushed up on tip-toes so I could see his eyes. “The sun’s doing a number on you,” I said. “Want a drink of water?”

He stared at me a while with a strange stillness, like he was in no hurry as he weighed every option. This boy was a local and he would pull me into events that would rock one of the largest industries in the Virgin Islands.

“Do you have Perrier?”

Gene Desrochers hails from a dot in the Caribbean Sea called St. Thomas. He grew up with minimal supervision and free-roaming animals in a guesthouse that also served as a hospital during wartime. If you ask, he will regale you with his Caribbean accent and tennis prowess.

After a lifetime of writing and telling short stories, he ventured into the deep end, publishing his first novel, Dark Paradise in 2018. Sweet Paradise is Gene’s second published novel in the Boise Montague Series.

He lives in Southern California with his wife, step-daughter, and two cats.

I received a complimentary digital copy of this book through Partners in Crime Virtual Book Tours. My comments are an independent and honest review. The rest of the copy of this post was provided by Partners in Crime Virtual Book Tours.
(My star ratings: 5-I love it, 4-I like it, 3-It's OK, 2-I don't like it, 1-I hate it.)
Posted by Joan Nienhuis at 5:43 AM

I also read the first book and need to get a copy of this one in my hands.

Thanks for the review! Really appreciate it.