The Making of Biblical Womanhood by Beth Allison Barr 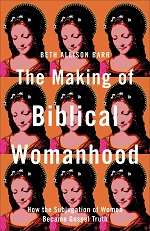 We are well aware that the church has taught complimentarian theology, that God designed women to primarily be submissive wives with men being leaders at home and in the church. It is biblical, the church claimed. Barr pulls the cover off that claim, revealing how wrong that theology is.

Barr gives many insightful arguments for her egalitarian view. She shows us how culture of patriarchy influenced the church. Rather than the church being different than society, it followed in the patriarchal footsteps. She challenges cultural context, saying if those verses about slavery are to be seen in such a way, why not those about women? A historian, Barr shares the many stories of women preaching throughout the centuries. She explores how Bible translators, men, reflected the culture rather than the actual original language. She explains how the heresy of the subordination of the Son was used to bolster the subordination of women.

What if evangelicals are wrong and they have been understanding Paul through the lens of modern culture instead of how Paul intended? What if Christians have been modeling their treatment of women after the world rather than what the Bible truly intends? She gives convincing insights into Bible passages in the original language that support her cause.

Barr is not merely spouting theory. She “experienced the worst of what complimentarianism has to offer,” she writes. (204) She does not hesitate to argue the authoritative male leadership attitude and rigid gender roles foster a culture of abuse. (207)

I highly recommend this insightful and timely book. How refreshing to know that complimentarianism is not the only option for Bible believing Christians. When the influence of male dominated culture is stripped from Bible interpretation, there is an egalitarian theology revealed.

Beth Allison Barr (PhD, University of North Carolina at Chapel Hill) is associate professor of history and associate dean of Graduate School at Baylor University. Her academic specialties include European women, medieval and early modern England, and church history. She has previously served as president of the Texas Medieval Association and the Conference on Faith and History. She is a pastor's wife and mother of two and lives in Waco, Texas. You can find out more at https://bethallisonbarr.com/.