Of Such is the Kingdom by James M Becher 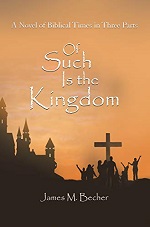 This is a very imaginative novel about the time of Jesus and the early church. Becher embellishes on the biblical account and provides vignettes of Herod, Pilate, Barabbas, and more. I like how he expands on hints from the Bible, such as making Pilate's wife quite overbearing and showing how tortured Pilate was after his decision to free Barabbas instead of Jesus. We are also given a believable reason for Barabbas to have been incarcerated. Becher does a good job of weaving together the stories of the various characters and introducing others to fill in the narrative. One of the vignettes, for example, is a person who went to the wedding telling of Jesus changing the water into wine. We get a good sense of the skepticism witnesses experienced when recounting their seeing the risen Jesus. We also see how belief in Jesus really changed lives.

The novel would have benefited from some additional editing. One example is ending one section with the thoughts of Manaheem, a male, and beginning the next section using “he.” It was quite some time before I realized now the he was Barabbas. (2176/3657). And, “The old geyser refused to work for me.” (3332/3657) A young man questions if there is money for college. (2356/3657) While the first university was established in 859, the term college did not come into use until the fourteenth century. And then there is an odd attempt at vernacular. Characters say y' for you and th' for the. Considering the characters in biblical times were not speaking English, “Did j' bring me somepin', Daddy?” (7453657) just does not seem meaningful.

This is a unique novel for readers of biblical fiction and I do recommend it. It contains some good insights into the time of Jesus and early church.

James M Becher is a graduate of Clearwater Christian College and Biblical School of Theology. He was ordained by Church Of God In Christ in 1974 and served in several churches. He met his wife while in ministry service in Venezuela. He began writing his biblical novel while in Venezuela and the second in the series upon returning to the U.S. You can find out more about Becher and his novels here.

Posted by Joan Nienhuis at 2:26 PM