Lights Out by Natalie Walters 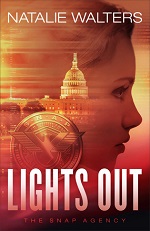 Brynn joined the CIA to prevent families from feeling the same kind of pain she felt when her father, a fireman, was severely hurt on 9/11. Assigned to work with a private investigation/protection firm, she is forced to work with Jack, an old flame. Sparks fly as the two try to put aside their hurt to investigate a number of suspicious events and people. Brynn finally manages to put all the pieces together, realizes the potential harm for the U.S. and that there is a race against time.

There are a number of issues explored in this novel. One deals with subversive agents, perhaps living in the states for years. Another is the homegrown extremist, the man who looks like your neighbor. What makes him become a terrorist? Another issue is the potential vulnerability of our entire computer grid to an attack. An interesting issue is the use of a private contractor to do things the government could not do legally.

Prominent in the novel are relationship issues. Jack and Brynn have a painful history yet love still simmers. They have some really exciting arguments, only to be near kissing a few moments later. That part of the novel seemed a bit repetitive. An issue with Brynn was her devotion to her CIA work. Was she obsessed, working diligently even if it was to her own harm? And then there are the relationships between the people working with Jack. They are a quirky bunch and their caustic interchanges were not easy to read.

This is a novel for readers who like romantic suspense with lots of character interaction and discussion interspersed with periodic investigative actions and suspense. You'll learn about cutting edge counter terrorism techniques too. I'll be watching for the next in the series.

Natalie Walters is the author of the Harbored Secrets series. A military wife, she lives in Texas with her soldier husband and their three children. She loves traveling, spending time with her family, and connecting with her readers. You can find out more at www.nataliewalterswriter.com. Photo: Emily Hendryx Haney