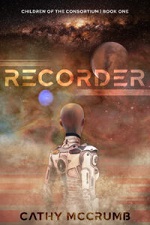 The Consortium is All. But Recorder Can No Longer Obey.

Recorder has no family, no friends, and no name. Donated to the Consortium before birth, her sole purpose is to maintain and verify the records. A neural implant and drone ensure compliance, punishing for displays of bias.

Suddenly cut off from controlling technology, Recorder tastes what it means to be human. But if the Consortium discovers her feelings, everyone she knows will be in danger.

With no name, no resources, and only an infinitesimal possibility of escape, Recorder’s time is running out.

I am a science fiction reader from childhood and I was pleasantly surprised with this debut novel. I found the main character, Recorder, engaging. She is an example of a technologically enhanced human trained to be emotionless, almost like a robot. Her purpose in life is to objectively record actions and conversations and report them to the ruling government. But what happens when she is separated from the enhancements? She's just human. That brings up a major issue in the novel. How do you adjust when you have outlived your original purpose? How do you handle feelings, desires, and distressing observations that are no longer controlled? How do you function at the sluggish pace unenhanced humans must endure?

McCrumb has provided a good balance of character development, human interaction, and science fiction technology. The setting is the future when nanodevices deliver neurotransmitters to level out emotions and to heal. Immediate pain is used to punish wrong behavior. People are eliminated when they are no longer useful. And Recorder-that-isn't must face the reality of her uncertain future since she can no longer function in her designated role.

The novel has lots of character growth and developing relationships. Some humans provide support but there is also a mystery to solve and a potentially deadly threat to face from others. There is even the hint of a possible romance.

One aspect of the novel I found difficult was the background sections for several of the characters. Often the chapter would begin with a seemingly unrelated event. By the end of the chapter, the relationship to a character would become clear but reading those sections was disorienting. And, this novel leaves readers hanging. Be prepared for an unresolved situation when you finish this novel. A sequel will be necessary to resolve the disturbing tension at the end.

Cathy McCrumb graduated from Biola University with a degree in English Literature and a love for stories. She and her husband, whom she met while writing letters to soldiers, have five children and currently live within the shadow of the Rocky Mountains. While writing is one of her favorite things to do, she also enjoys reading, long hikes and long naps, gluten-free brownies and raspberries, and crocheting while watching science fiction movies with friends and family.

When I was about three, my first imaginary friend, Sally from Clap-Hands-Land, threw a man’s hat in the air. At the time, I found her action uproariously funny, though I no longer remember why. As I grew older, speculative fiction—almost any variety of fantasy or science fiction—became my favorite stories to tell and read.

Once I had children, however, all I managed were practical lists on scraps of paper. I shoved down that desire to create until after my youngest was born, when a friend challenged me to write again. That first short story began a landslide of words and ideas about grace, worth, and the sometimes-bittersweet reality of daily life. Soon afterward, a story was born from a vivid dream set on a stark moonscape. As I wrote it down, the Recorder herself sprang into being, and Recorder became inextricably bound to her point of view.

For me, stories are fundamentally about possibilities. The tension between catastrophe and eucatastrophe plays out with relative safety on the page. I believe that when ideas and themes intersect, however, stories can reach deep within authors and readers. Indeed, if they do not touch the author, they are unlikely to impact anyone else. When failure, grief, and evil are contrasted with faith, hope, and love, the narratives inspire deeper connections with our own emotions, others, and God. Tales of light and dark challenge us with the opportunity to think through truths and lies without leaving home.

And yet, transformation itself isn’t safe, and therefore fiction can’t be, either. The risks inherent in change open the possibilities of growth and failure. Stories provide an exploration of becoming. They can open a divide through which we can glimpse something greater or worse than our own worlds. Fiction allows us a place where we can practice and triumph.

And maybe, perhaps, even throw our hats into the air.

Labor Not in Vain, November 26

For Him and My Family, November 26

Through the fire blogs, November 30

The Meanderings of a Bookworm, December 1

Posted by Joan Nienhuis at 5:37 AM