Christianity is a world view that impacts all aspects of life, including finances. Jones contends that “prosperity theology is a corruption of [God's] self-revelation, a distortion of His plan of redemption, and an idea that can ultimately lead to a reckless view of the material world.” (8) Woodbridge realized “that the purpose of life is not about accumulated money, health, or a great career – it's about knowing God.” (9) Hence, their writing this book.

The prosperity gospel is growing. Fifty of the largest churches in the U.S. promote it. (15) A recent survey found 46 percent of self-proclaimed Christians agree that God will give material riches to believers who have enough faith. (16)
The authors give a survey of the historical foundations of the movement and its relation to New Thought, a movement that began in the late nineteenth century. The teachings of New Thought are reviewed, including that the mind creates and controls reality, that God is an impersonal force, people are essentially gods, and a focus on health and wealth.
Then they give a summary of the teachings of the prosperity gospel. E. W. Kenyon was it's father. “Kenyon believed that positive confession is the key to prosperous living.” (52) Kenneth Hagin was it's greatest evangelist and the father of the Word Faith movement. The authors review the problematic teachings of these and other prosperity teachers and preachers.
The authors then move to the doctrinal errors of the prosperity gospel, comparing it to the message of the biblical gospel. Areas compared include faith, the atonement (supposedly including physical healing), and the Abrahamic covenant.
They look at the important biblical teachings on suffering as a correction to the prosperity gospel. They show that suffering is a “normative part of the biblical record and everyday life...” (110) “Much personal suffering is the result of natural evil... ...[T]he purpose of such suffering is ultimately to foster a person's relationship with the Lord.” (113) Some suffering is the result of moral evil, willful breaking of the law of God, sometimes by someone else.
The authors then build a theology of wealth and poverty. They admit that it is challenging to establish an ethic of wealth and poverty from the example of Christ. “...He gave no systematic, detailed economic plan to His followers.” (133) Their synthesis of O. T., gospels, and epistles yields: labor is good, the Lord's followers are to minister to the poor, and wealth can be a spiritual stumbling block. (138) The authors go over the four possible ways to connect material wealth/poverty and spiritual wealth/poverty. They conclude, “A study of the biblical teaching on wealth and poverty makes clear that the prosperity gospel is not the biblical gospel.” (140)
Finally, they look at giving, being a faithful steward. They note that, “...generosity is one of the best indicators of the condition of the heart.” (146) O. T. law required Jews to give “more than 25 percent in annual income tax to the theocratic government of Israel.” (151, quoting John MacArthur) While the N. T. is relatively silent n tithing (153), it does provide several principles of giving. Giving is to be periodic, personal, planned, proportionate, and plentiful. The authors review principles of choosing recipients.
The authors conclude by helping the readers discern if a false gospel is being taught in their church. They also have suggestions on helping you minister to those you know caught up in the prosperity gospel.
The authors provide a summary at the end of each chapter, great for review.
This is a slim (165 pages) but powerful book. The Scripture and subject indices at the end of the book are great. Every evangelical Christian needs to read a book like this one to be aware of what is currently being taught in churches. I highly recommend it. 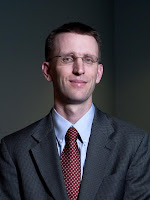 David W. Jones (PhD, Southeastern Baptist Theological Seminary) serves as associate professor of Christian Ethics and coordinator of ThM and Thesis Studies at Southeastern Baptist Theological Seminary. The coauthor of God, Marriage and Family, David is a frequent speaker at churches, ministries, and conferences. He lives in North Carolina with his wife and four children.

Russell S. Woodbridge (PhD, Southeastern Baptist Theological Seminary) is currently serving in Eastern Europe with the International Mission Board. He has lectured on the prosperity gospel both in the seminary classroom and the church, and published articles on Christian stewardship. Russell currently resides in Kiev, Ukraine, with his wife and four children.
I received a copy of this book from Kregel publications for the purpose of this review.
Publisher information.
Posted by Joan Nienhuis at 6:01 AM

Thank you for your review. I appreciate your recommendation and hope that the book will help people discern error.