What do your hands reveal? The rough skin. The weathered cracks.
Shelley had a dream and realized all people had something in common ... what their hands tell about them. Hands tell honest stories.
Photographer Terilee knew when Shelley contacted her that this was a project that would use the gift God had given her in photography. Photographing hands has changed her forever. She has learned to have the courage to understand the deeper side of people. 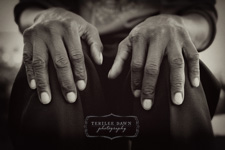 Caesar.  "Tall and slender with his head held high, he walks with an air of gratitude in each step."  His life is simple and his possessions few.  He is from Sudan, orphaned at a young age during the Sudanese Civil War.  He traveled the world and began to express his own voice in writing, exposing some of the terrors of the Al-Bashir regime.  A target of the Sudanese rebels, Caesar remains in the U. S. under protection. 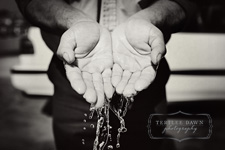 Franco.  He is proud of his reputation as an automobile detailer.  He was born and raised in Guatemala.  He wanted to pursue higher education, then law school.  But there were too many obstacles.  He came to the U. S.  Auto detailing may not have been his dream, but he is a role model of gratefulness and courtesy.  He has a high standard of service.  He is a hard-working father, knowing his dedication will allow his daughter to go to college. 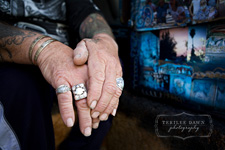 Danny.  After a long day of heavy moving and hauling, his joy is to come home and set his inner artist free.  He presses his paint sprayer, finishing another large vehicle custom paint design. The sky is the limit. The universe with all its glory is his signature design.  He loves to create.  The freedom of his artwork has helped him survive the most difficult trials in life.  Discarded items become a work of art in his hands.  His swollen fingers reveal that he goes the extra mile when he works. 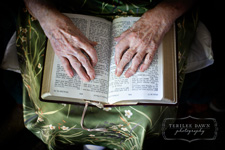 Gladys.  "Her fingers are taking a shape of their own these days."  To move them is painful.  She can still write a letter, she enjoys reading her Bible.  In her younger days she found her calling in her local Lutheran church.  She help many positions before the ultimately became the designated writer of notes, acknowledgments, birthday greetings, and thank you cards.  Her skill exemplifies "the art of letter writing."  Now homebound, she is far from bored.  Life is simple and visitors are treasured. 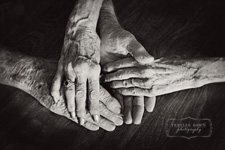 Woody and Kay.  It was a surprise romance. He had just lost his beloved wife of sixty years.  The hardest thing for him to do was continue on without her. Then along came Kay. They had known each other 80 earlier in elementary school.  Now they were both widowed.  Only weeks after the reunion they decided to get marries.  In a few months they were married. The world again had a joyous light.
There are hands of builders and bakers, of students and seniors. There are young hands, old hands, and scarred hands.
The people in this book are not famous. They are inspirational, however. They are people who have overcome difficulties, and weathered adversities. They are people who play together, and work together.
They are people just like you and me who have made a difference with their hands.
You've just got to go to these websites to see more sample pages : http://marthamartha.net/ and
http://marthamartha.net/realexerpts/index_nobg.html
Greeting cards for sale: http://marthamartha.net/shop/shopnotecards.html.
Real - The Book from David Malcolm on Vimeo.
Buy the book: http://marthamartha.net/shop/shopbook.html.
Proceeds from Real go to various charities.  Go to http://realthebook.blogspot.com/ for more information.

While this is her first book, Shelley Malcolm is no stranger to creative projects. She is co-owner and restorer on an historic chapel, La Perla del Mar in Shell beach, CA, and a set designer for theater and film. She was named Pismo Beach's Citizen on the Year in 2011 for her extensive contributions and involvements in the community. Shelley graduated from the university of Southern California with a degree in dental hygiene. Shelley and her husband live in Shell Beach, California. They have four adult children.
Terilee Ouimette loves art, people and traveling. Photography has been a great medium to combine her passions.  She runs Terilee Dawn Photography.  She has been married for five years and can't wait to see where life takes her next.  You can see her work at http://terileedawn.com/ and follow her blog at http://www.terileedawn.com/blog/.
I received a complimentary copy of this beautiful book from the author for the purpose of this review.
Posted by Joan Nienhuis at 6:30 AM