How could our world be different if Christians were recognized for not only speaking the truth, but also demonstrating mercy?
What would our lives be like if we reacted to our common culture with not just biblical facts, but also grace and compassion?
For more than 25 years, Marvin Olasky has offered this kind of viewpoint in his columns as the Editor-in-Chief of World Magazine, the leading news magazine written with a Christian perspective. In this collection of far-ranging columns, Olasky's commentary on world events and affairs, as well as his own personal interactions, encourages readers to respond with both grace and truth in every encounter. 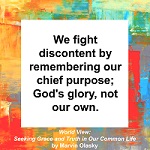 A leading voice for standing for biblical truth in the public square, Olasky also believes Christians should incorporate the biblical virtues of humility, kindness, and mercy in all of life. His call for biblical values to include both truth and mercy makes his voice stand out in a world that often falsely divides those goals and settles for a poor imitation of the robust Christianity described in Scripture. These short and punchy columns offer readers a new way to consider challenges in today's world and shows them how to respond to any encounter biblically, but not hysterically, providing a wake-up call for the complacent, while also calming the frantic. 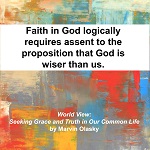 The columns, dating from 1997-2016, are loosely arranged into broad subjects. They originally appeared in World Magazine. Olasky contemplates what an ideal Christian protest should look like. He suggests how we might present our case, following the example of Paul reasoning in Greece. Other topics include abortion, the constitution, transgender, immigration, movie reviews, how to think through issues, and many more. Some of these essays go back twenty years and seemed dated to me. Some of the columns reflect Olasky's personal opinion and may not reflect the opinions of other Christians.

The value of these columns, I think, is in the reasoning Olasky does in them. He thinks through issues before he reveals his conclusions. They are good examples for Christians who want to know how to do that process.

There is an index to the columns and that is important. Reading through the essays from beginning to end was not very satisfying for me. One could use the index and read Olasky's thoughts on a particular issue. In that way this book would be a resource for thinking Christians.

I am taking part in a blog tour. Read more reviews here.

Learn more, read a sample, and purchase a copy here.

Marvin Olasky is editor-in-chief of "World News Group," a distinguished chair in journalism and public policy at Patrick Henry College, and the author of more than twenty books, including "Compassionate Conservatism" and "The Tragedy of American Compassion." He and his wife, Susan, have four sons and five grandchildren.
Find out more about Marvin at http://stores.newgrowthpress.com.

I received a complimentary egalley of this book through Litfuse. My comments are an independent and honest review. The rest of the copy of this post was provided by Litfuse.
Posted by Joan Nienhuis at 5:55 AM