Echoes Among the Stones by Jaime Jo Wright 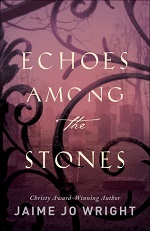 Wright is a master at crafting the time slip novel. In this case, a contemporary, Agnes, tries to solve the seventy year old murder of her great aunt. Agnes is caring for her 92 year old grandmother as well as reorganizing the local cemetery, disturbed by recent flooding. Her life is complicated by the handsome Collin, the archaeologist hired by the cemetery district to aid in identifying remains.

The narrative covers the present action and what happened in 1946. Wright does a good job of transitioning from one era to the other, revealing information in parallel form, as it happened then and as it is discovered now. Solving the murder is a complex task and I felt there was a bit too much brought in at the end without enough foreshadowing.

Wright covers several interesting issues in this novel. One is the government taking over land during war time, often at an undervalued price. We get a good sense of the unrest that caused among the land owners. Another prominent issue is how people process (or hang on to) grief. There are also several good discussions about the struggles one might have as to why God allows tragedy, such as the death of a young woman.

This is a good novel of contemporary family members overcoming their hurts combined with an old mystery still having ramifications and including a touch of romance.

By the way, like Agnes's 92 year old grandmother, I wash and reuse my resealable plastic bags. Do you?

Jaime Jo Wright is the author of several previous novels, The House on Foster Hill winning both the Christy Award and the Daphne du Maurier Award for Excellence in Inspirational Romantic Mystery/Suspense. She has also won the Carol and INSPY Awards. She is the Publishers Weekly and ACPA bestselling author of three novellas. She works as a human resources director in Wisconsin where she lives with her husband and their two children. You can find out more at www.jaimewrightbooks.com

I received a complimentary egalley of this book from the publisher. My comments are an independent and honest review.
Posted by Joan Nienhuis at 7:14 PM

Yes, I wash and reuse plastic bags. Years ago, my mom was washing a bag while my sister was over with a friend, and they thought that was so funny. Conserving wasn’t a concern for them.
Mysteries aren’t my favorite genre, but I do enjoy time split novels. I’ll have to read this one.

Hi,
Nice Post, Thanks for sharing,
Get a 6-month trial offer of Amazon Prime and then pay just 50% of the membership i.e. $6.49 per month (only if you want). Get 90% discounts on many textbooks, get amazing offers on your orders, free delivery and chance to win some amazing gift cards.
Visit For More Information: Amazon Student Discount