Sins of the Father by J A Jance 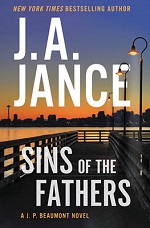 I have thoroughly enjoyed the J P Beaumont series from Jance. I have followed his career in the Seattle PD and then his retirement to Bellingham. Now he is a PI and here he is on a somewhat personal case. An old acquaintance with a new grandchild and a missing daughter. A daughter who looks so much like Beaumont's daughter he wonders if she might be the result of a one night stand decades ago.

This novel of Beaumont as a PI is a welcome change from the “shoot 'em up” police detective novels. The plot centers around investigation, not suspense. I was happy to see it included some historical information about Seattle and Bellingham, woven neatly into the narrative. I liked finding out more about Beaumont and his character, now sober but previously irresponsibly drunk at times. There is a good dose of family relationships too.

While this novel is part of a long running series, there is plenty of back story so it can be read on its own. It would be a good choice for senior citizens. Beaumont may not be able to move as fast as he did when in the Seattle PD but he can still solve a murder case.

J A Jance knew in second grade she wanted to be a writer. Her ambitions were frustrated in college as the professor who taught creative writing did not think women should be writers. Refused admission to the program, she married a man who was allowed in. Her husband did not want her to write so she put it on hold for eleven years, until she was the divorced mother of two. She wrote early in the morning so she could sell insurance to put food on the table. She finally had her first novel published in 1985, a Detective Beaumont novel and 21 more featuring him followed. She added 17 Joanna Brady books and 11 Ali Reynolds books, those set in Arizona, her home state. She and her second husband spend their time in Seattle and Arizona. You can find out more at http://www.jajance.com/ .

I received a complimentary egalley of this book from the publisher. My comments are an independent and honest review.
Posted by Joan Nienhuis at 2:50 PM