Seconds to Live by Susan Sleeman 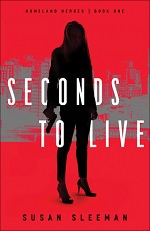 The plot involves Sean, an FBI agent from the east coast, and Taylor, a Deputy Marshal in the witness protection unit in Portland, Oregon. The two had collaborated before and via email had struck up a friendship. When Sean is in Seattle for a meeting, a potential lead in Portland causes him to go there. He and Taylor see each other for the first time and romance is heavy in the air. There is some difficulty and testiness in their relationship however, as they join forces to go after the villain attempting to kill one of Taylor's protected witnesses.

This is definitely a character driven novel in that there is much more time spent on character thoughts, relationships and interactions than there is on action or suspense. The emphasis on character feeling was a bit much for me. Here's an example. When Sean and Taylor, guns drawn, are approaching a potentially hostile location and Sean barks a command, Taylor's thoughts: she loved how sure he sounded, how strong he looked with his Kevlar vest and weapon in hand. (Loc 2595/4780) At another time, right before Sean goes into a dangerous location, he kisses Taylor. Later, still at the scene, he thinks she wants to talk about the kiss. “A crime scene's not the time or place,” she responds. (Loc 3636/4780) Exactly. Not the time or place to kiss either!

This is a book for readers who like lots of character work toward romance and very little suspense. There is a little suspense at the end but that's it.

Susan Sleeman (www.susansleeman.com) is the bestselling author of more than 35 romantic suspense novels with more than 1 million books sold. She has won several awards, including the ACFW Carol Award for Suspense for Fatal Mistake and the Romantic Times Reviewers' Choice Award for Thread of Suspicion. In addition to writing, Susan also hosts www.thesuspensezone.com. She has lived in nine states but now calls Portland, Oregon, home.

I received a complimentary egalley of this book from the publisher. My comments are an independent and honest review.
Posted by Joan Nienhuis at 6:38 AM