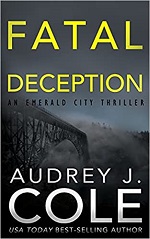 I have read all of the novels in the Emerald City Thriller series and this may be the best one yet. Part of it might be the setting of Whidbey Island. Born and raised on the island, I appreciate it being the location of the fictional deadly cult compound featured in this book. I really like Cole highlighting the scenic views of mountains Baker and Rainier and the dangerous cliffs that frame much of the island's edge.

But the best part of the book was the exciting plot. Tess, with the Seattle Police Department, goes undercover to become one of of many women following a popular wellness guru with a compound on Whidbey Island. The situation turns deadly and there is a suspenseful climax on the narrow and dangerous Deception Pass Bridge.

There are many issues covered in this book. An issue for Tess are the after effects of her brother being stabbed (in The Summer Nanny). A scary issue in the novel was the way the women were brainwashed by the guru. And where else will you find out about Sequim (pronounced skwim) being in the rain shadow of the Olympic Mountains?

This is a good novel for readers who like a well crafted suspenseful plot with well developed characters and best of all, a wonderful scenic, though dangerous, island setting.

This is the fifth in the Emerald City Thriller series and you can read my reviews of the previous books: The Recipient, Inspired by Murder, Summer Nanny, Viable Hostage.

Posted by Joan Nienhuis at 9:29 AM