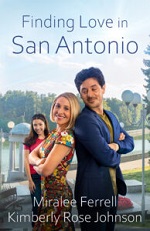 For TV chef Adela Romero, the lights of LA have lost their luster. The grief of her husband’s death three years ago still hangs heavy over her and her daughter, Fabi.

When Adela hears her mother-in-law’s Mexican diner is struggling, she decides to return to San Antonio and try to make a fresh start—though she can’t leave the media attention entirely behind.

Local food critic David Agraponte has a history with Adela. A history he’d like to rekindle. When he interviews Adela, sparks fly—both good and bad. In Adela’s struggle to put her past behind her, she’s tentative about a new relationship, but David hopes she’ll stay at Romero’s long enough to give him a chance.

Sandra always dreamed of managing Romero’s one day, but her chances of proving herself to her aunt are slim with her famous TV-chef cousin taking all the attention. Can’t her aunt see that Adela’s just passing through on her way to her next big gig? Still, as much as she resents it, Sandra may need Adela’s help if there is going to be a Romero’s left for her to manage.

When Adela gets a TV offer that’s sure to shoot her career to the stars, her choice may hold more than just her future in the balance. Can David and Adela find a way to save Romero’s and hold onto their own dreams, or will Adela’s opportunity push them apart?

This is a fun novel offering a chance for romance on a number of different levels. Adele needed to face guilt over the death of her husband, that she had taken him away from his home. She had devoted herself to her career as a guard to her heart. Her mother-in-law devoted herself to her restaurant. Sandra just seemed off of men. Each of them have opportunities to face their issues and be open to romance.

There are also choices people must make. For Adele, it is her career. What is really more important – career or family? Sandra needed to choose whether to continue to try to know it all or begin to cooperate with others. Victor faced choosing a new location for his business. All of them saw things shaken up, presenting new opportunities if they chose to venture out.

This is an enjoyable novel for readers who like a story exploring people facing the issues with which they have guarded their hearts. The characters are interesting. The plot is reasonable and entertaining. There is a subtle faith message too.

Miralee Ferrell is an award-winning, best-selling author of 27 books. Her novel, Runaway Romance, released in January 2018 on UP TV, and subsequently on Hallmark on Demand, and From the Heart, aired in 2020 on Hallmark. Finding Love in Bridal Veil, Oregon, aired September of 2021, and Finding Love in San Antonio will air sometime in 2022.

Miralee is the owner and founder of Mountain Brook Ink, a traditional publisher with over 100 titles, a large number them being award-winners. She lives in the Pacific N.W. with her husband, two cats, sixteen chickens, and one very spoiled little dog. Miralee loves horseback riding and hiking with her married daughter.

While Miralee has spoken in a number of venues, she doesn’t see herself as a speaker as much as an encourager. She loves helping writers find ways to succeed, improve, and learn to believe in themselves, whether by teaching a class, leaving positive comments in an edit or critique, or speaking to groups about her writing journey and how the Lord might minister to them.

Award winning author Kimberly Rose Johnson married her college sweetheart and spent most of her life in the Pacific Northwest. From a young child Kimberly has been an avid reader. That love of reading fostered a creative mind and led to her passion for writing. She especially loves romance and writes contemporary romance and romantic mystery and suspense with a heart.

Kimberly Rose Johnson here. I’m excited to share my story behind the writing of Finding Love In San Antonio. Last year Miralee Ferrell approached me about a project she was working on. She wanted me to write the story of a secondary character into a book she was adapting from a movie, and bonus, I was given license to choose the character. She sent me the script and my imagination took off. What fun!

I knew right away which character’s story I wanted to write. So many ideas of who this woman was behind the scenes filled my mind. I chose Sandra, the heroin’s cousin by marriage. Sandra was sassy in the script and somewhat negative toward Adela. As a positive person who tries to see the bright side in every situation, this bothered me about her, so I had to create a strong reason why she would be this way. In the final cut of the movie, I don’t think Sandra came across nearly as negative as she did in the version of the screenplay I originally saw, so I think along with the backstory I gave her and the fact that I toned Sandra down worked well.

Before this book neither Miralee or I had never co-written a book before,, but I must say, I enjoyed it! I had written a story within a story for one of my own books in the past, so I basically did the same thing for this one. We are both so pleased with the outcome that we are going to do it again.

We hope you enjoy seeing the fleshed out version of the movie in our book!

For Him and My Family, June 19

Because I said so -- and other adventures in Parenting, June 24

Thanks for sharing g your thoughts about the book.

Thank you for sharing your review of Finding Love in San Antonio, this sounds like a wonderful read and I am looking forward to it

This sounds like a great read. Thanks for your review.

Thank you for sharing. this sounds great

Thank you for sharing your wonderful review! I enjoy stories set in my home state of Texas.

Finding Love In San Antonio sounds like a delightful read and I am looking forward to reading it! Thanks for sharing it with me! Thanks, Avid Reader, for sharing your review! Have a sunshiny day!

This sounds like a fabulous exploration of how our choices drive our lives!