The Woman in the Library by Sulari Gentill 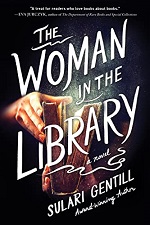 This is an interesting mystery centered on the relationships between four people, two women and two men, formed after they hear a scream while in the reading room at the Boston Public Library. Later, a woman is found murdered in a nearby room. We are set for a murder mystery as the narrator tells us one of those four is a murderer.

Th plot is complex and layered. At the center is Freddie, Winifred, who is from Australia and in Boston on a writing scholarship. She is the narrator of the events precipitating from that life changing experience in the library. Outside of that plot aspect, we find the library event and subsequent events are, in fact, part of a novel written by Hannah Tigone. She lives in Australia and because of travel restrictions, cannot be in Boston where her novel takes place. Her ongoing work is being reviewed and critiqued by Leo, Boston writer with whom she has struck up a correspondence. The narrative is generally a scene from Hannah's novel and then a response from Leo.

There are layers of mystery uncovered as Hannah's novel develops. Previous relationships are uncovered, some with respect to the murdered woman. Previous actions are revealed casting suspicion on one of the four, one of the men. Another murder happens and then an attack and all the evidence seems to point to the one man as the murderer. The outer part of the plot becomes more complex when Hannah suspects Leo's information about murders might be more reality than fiction.

The end is a quick one with a very short resolution. It is the same for the inner story and the outer, letters to Hannah, story. I liked the novel and the story within a story plot. None of the characters really grabbed me as they seemed a bit flat. Nonetheless, I did find the novel entertaining.

Sulari Gentill is Australian. Born in Sri Lanka, she learned to speak English in Zambia and grew up in Brisbane. She went to university to study astrophysics, graduated in law and after years of corporate contracts, realized she wanted to tell stories, having written thirteen published novels. She lives with her family and writes on a small farm in the Snowy Mountains of NSW. You can find out more at http://sularigentill.com/

Posted by Joan Nienhuis at 1:57 PM