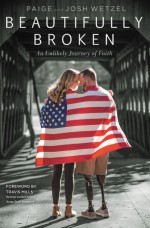 This is a touching memoir of a couple facing the unthinkable. Josh was a team leader in Afghanistan, using a metal detector. He had found dozens of IEDs before this one. But this one was nonmetallic, a carbon based IED. It exploded beneath him, and he immediately lost both his legs.

Paige and Josh share their experiences. Paige begins with the phone call. They share the narrative as we follow his transportation to Walter Reed, having three surgeries a week, the therapy, counseling, the infection and setbacks, the prostheses, the fight for every inch of mobility. They are honest about the stress on their young marriage, the spiritual struggles and being told they might never be able to have children.

This is quite a detailed account. I learned a great deal about the hospital stay and the difficulty of fitting the prostheses. The pain involved is disheartening. The amount of patience and courage Josh and Paige had to produce is amazing. The descriptions of the wounds and medical procedures are not for the faint of heart. Paige's honest account of her postpartum depression may be difficult for some too. The marital problems were heart breaking.

This book is a good memoir of going through very difficult times and ultimately learning to trust God for the present and the future. It is an encouraging account of overcoming many obstacles to live a fulfilling life. It will give you hope for restoration and renewal and a road map for your mission in serving others.

Paige Wetzel is wife to double amputee Retired Army Sgt. Josh Wetzel. Paige served as the Director of Volleyball Operations for Auburn University for four years where Josh is the Assistant Director of Digital Media. Between getting injured and March of 2014, Josh Wetzel was promoted to Sergeant, received the Purple Heart Award, officially retired from the Army and began his civilian life with his family. The Wetzels remain active in the support of veterans, enjoy serving at their home church, and promoting Auburn Athletics. They have two daughters and live in Auburn, Alabama.