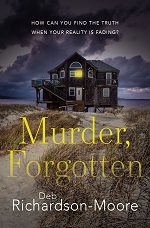 With the publication of 'Murder, Forgotten', Deb Richardson-Moore departs from her popular Branigan Powers series and introduces us to an unforgettable protagonist and a heart-pounding mystery that explores the vagaries of the mind and the way our memory often betrays us. The themes are both universal and personal at once. How does grief alter one’s memory? Is there more truth in fiction than in reality? This is a novel will have readers questioning their own motivations and that of the protagonist, Julianna Burke.

Julianna is a mystery writer who is famous for her ‘wanderings’ – eventually returning to her writing desk with exciting plot twists. But lately, she has nothing to show for her creative work. She fears her memory is slipping, and with it her heralded career.

Then her beloved husband and business partner is murdered. The police look at workmen, extended family and neighbors, but Julianna fears something far worse. Could she, deep in the writing of her latest mystery, 'Murder, Forgotten,' have acted out the fictional murder? In this plot within a plot, she seeks to find the killer. Can she find the truth when she questions her own reality?

'Murder, Forgotten' takes us from coastal South Carolina to the eastern shores of Scotland in a sweeping mystery that explores Julianna, grief-stricken and wounded, as she searches for truth in the midst of her own fiction.

I thoroughly enjoyed this mystery. It is an engaging tale of murder, mystery, secrets, and relationships. I found it interesting there was really no heroine. No one really figured out the mystery until the suspenseful end. I had an inkling early on who the villain was but Richardson-Moore did a good job of making so many characters possible suspects, I was unsure until the suspenseful revelation. There were lots of red herrings too.

Even though there was no specific heroine, I liked how each of the characters was developed. I found some to be likable while others caught my disgust. Just like any community, some were giving while others were grasping to fill the emptiness inside. There is a good discussion guide included to help readers delve into the relationship and cultural issues included in the plot.

I found this novel to be enjoyable all around. Richardson-Moore just keeps getting better. I'll be on the lookout for her next one.

In the days following Connor’s death, Logan had spent more time with her mother than in the past several years. Julianna had gone to stay with her neighbor, Liza Holland, and had moved through Liza’s house like a ghost – or a mental patient. She had appeared vacant at the funeral, with Margot hovering at her elbow to cover her lapses with both local mourners and New York publishing executives. Just last week, after deputies allowed Julianna back into this house, Logan had brought dinner. Through all that, her mother had never mentioned a new book.

But then she wouldn’t have. She was spacey at the best of times. After Connor’s death, her sleep became more disrupted, her empty stares more pronounced, her answers more nonsensical. Frankly, Logan had been relieved when Margot whisked her out of the country. But if you didn’t have to deal with the real Julianna Burke, the thought of a new Julianna Burke mystery was delicious. Logan would snuggle into bed sooner than she had planned and see what Martin Engler’s problem was. But first, she had to lock up downstairs. She stood, nearly tripping over Annabelle, who’d followed her into Julianna’s room unnoticed.

“I know, baby girl,” Logan said. “Your mama will come back. I promise. But you get to sleep in my room tonight. How’s that?”

Annabelle trotted out of the room and dashed to Logan’s childhood bedroom. She sat at the door, looking up expectantly. “Back in a flash,” Logan assured her. She walked down the stairs and through the living quarters, turning off a living room lamp, rechecking the security alarm, and locking the door that led from the kitchen on to rickety side stairs. Circling back, she saw the glow from her mother’s office. She knew she’d left a light on, but the hairs on the back of her neck bristled nonetheless.

She’d never been afraid in this house, not once, not even as a teen left alone overnight when her mother and Connor remained in Columbia or Greenville or Asheville after a book signing. “The neighbors are so close,” she’d whined in her successful campaign of persuasion not to be dragged along. But those close neighbors hadn’t prevented Connor’s murder. For that matter, neither had the other two people in the house.

Logan took a steadying breath and returned to the office, the black binder still in her hand.

She reached to turn off the desk lamp but then thought about this treasure she’d unearthed in Connor’s bedside table. What else might there be? Resolutely turning her back on the blood-stained chair, she pulled open the slender top drawer of her mother’s desk. She felt guilty for a moment. Though she’d talked to her distracted mother from the office doorway or slouched on the couch as a teen seeking permission for one thing or another, she’d never been alone in this space.

Deb Richardson-Moore is the author of 4 fiction titles and a memoir, The Weight of Mercy, about her early years as a pastor at the Triune Mercy Center in Greenville, S.C. A former national award-winning reporter for The Greenville News, Deb is a popular speaker at book clubs, universities and college events. She has won numerous awards for her philanthropy and community involvement, including the 2014 Women Making History Award from the Greenville, South Carolina Cultural Exchange Center and the 2016 Public & Community Service Award from the Atlantic Institute. A graduate of Wake Forest University, Deb lives with her husband in South Carolina.

I received a complimentary digital copy of this book through Partners in Crime Virtual Book Tours. My comments are an independent and honest review. The rest of the copy of this post was provided by Partners in Crime Virtual Book Tours.
(My star ratings: 5-I love it, 4-I like it, 3-It's OK, 2-I don't like it, 1-I hate it.)
Posted by Joan Nienhuis at 5:17 AM

I have this book on my wishlist and hope to have a copy in hand soon.

Joan,
Thank you so much for including this kind review on your blog.