Everywhere to Hide by Siri Mitchell Blog Tour and Giveaway 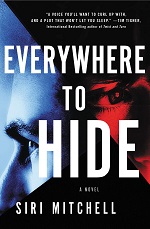 How can she protect herself from an enemy she can’t see?

Law school graduate Whitney Garrison is a survivor. She admirably deals with an abusive boyfriend, her mother’s death, mounting student debt, dwindling job opportunities, and a rare neurological condition that prevents her from recognizing human faces.

But witnessing a murder might be the crisis she can’t overcome.

The killer has every advantage. Though Whitney saw him, she has no idea what he looks like. He knows where she lives and works. He anticipates her every move. Worst of all, he’s hiding in plain sight and believes she has information he needs. Information worth killing for. Again.

As the hunter drives his prey into a net of terror and international intrigue, Whitney’s only ally, Detective Leo Baroni, is taken off the case. Stripped of all semblance of safety, Whitney must suspect everyone and trust no one—and hope to come out alive.

I found Mitchell's novel to be interesting. While the mystery aspect of the plot was sufficient, the best part of the novel was that it dealt with some very relevant issues. I learned about cryptocurrency and blockchains. I also learned about tutoring for test taking. And perhaps the most significant issue was the influence of China on our nation's finances. China is the major debt holder for the U.S. With recent trade wars and withdrawal from national coalitions, the U.S. doesn't have many friends any more. That puts this nation in a very vulnerable place financially.

The most interesting aspect of the heroine, Whitney, was that she had face blindness. That is a rare but very real condition, the inability to identify faces. It was interesting to see her live experiences through that condition.

There was no Christian content in this novel, even though it was published by a “Christian” publisher. At one point, Whitney had planed to move in with her boyfriend, in fact. (Loc 1303/3541) We find out later in the novel that their relationship blew up before that happened but it was still disconcerting.

This is a very informative novel dealing with issues relevant to the current political and financial situation of the U.S.

The door was difficult to open. The tropical storm had transformed the alley into a wind tunnel, funneling the muggy air from one side of the block to the other. I raised a hand to pull my hair off my face and turned into the wind to keep it there, quickly turning my ponytail into a bun. As I stepped away from the door, I was surprised to see someone sprawled on the pavement in front of me.

He was lying face up. A red puddle had formed a halo around his head.

As I stood there trying to process what I was seeing, the wind sent a recycling crate skidding across the cracked pavement.

I glanced up the alley, then down. Nothing was there. Nothing but the wind. And a dead man staring up at the cloud- streaked sky.

Behind me, I heard something scrabble across the low, flat roof.

I pivoted and glanced up. Saw a form silhouetted against the sky. Shock gave way to panic as I realized he had a gun in his hand. As I realized that he had also seen me.

I should have lunged toward the door.

But a familiar numbness was spreading over me. The prickle on my scalp, the sudden dryness in my mouth. I was living my nightmares all over again.

As I had done too often in the past, I reverted to form. I froze.

My thoughts latched onto that one word and refused to let it go.

If I could just punch my code into the keypad, I could slip back inside and pull the door shut behind me.

But I couldn’t do anything at all.

I willed them to function, but they had long ago learned that in a dangerous situation, the best thing to do was nothing. Any movement, any action on my part had always made things worse.

And so I just stood there as my thoughts stuttered.

Siri Mitchell is the author of 16 novels. She has also written 2 novels under the pseudonym of Iris Anthony. She graduated from the University of Washington with a business degree and has worked in various levels of government. As a military spouse, she lived all over the world, including Paris and Tokyo.

This is a rafflecopter giveaway hosted by Partners in Crime Virtual Book Tours for Siri Mitchell. There will be 3 winners. Each winner will receive one (1) physical copy of Everywhere To Hide by Siri Mitchell (U.S. addresses only). The giveaway begins on October 1, 2020 and runs through November 2, 2020. Void where prohibited.

I enjoy books that are also a learning tool as well as an entertaining read.