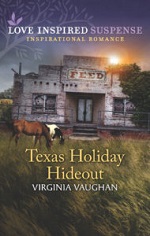 When her identity’s exposed,

hiding on a lawman’s family ranch is her last hope.

After her mother is killed, Melissa Morgan’s shocked to learn she’s spent her life in witness protection. Now it’s US marshal Miles Avery’s job to keep her and her little boy safe. And with a mole in his agency, the only way to evade the killer is to hide Melissa on Miles’s family ranch…and pretend she’s his wife for the holidays.

This is an enjoyable romantic suspense. The characters are engaging. I can appreciate Melissa being terrified, having seen her mother murdered. Miles is a good hero although he doesn't seem to be able to keep himself within the U.S. Marshall guideline of not becoming emotionally involved with the woman he is to protect. There is a great deal of suspense as Melissa's life is repeatedly put in danger. I was a little disappointed in Miles' protection abilities as, even after repeated attacks, he would leave her without a trusted law enforcement official by her side. Of course, another suspenseful event ensued.

While this is a fine novel to read on its own, it is the second in a family series. You can read my review of the first in the series, Texas Twin Abduction.

This novel is an entertaining one. It has some fine characters, lots of suspense, a good dose of romance, and a subtle but good faith message. There is to be a third in the series and I'll be looking for it.

Virginia Vaughan is a multi-published author of inspirational romantic suspense. Blessed to come from a large, southern family, her fondest memories include listening to stories recounted by family and friends around the large dinner table. She was a lover of books even from a young age, devouring gothic romance novels and stories of romance, danger, and love. She soon started writing them herself. A former investigator for the State of Mississippi, Virginia utilizes her criminal justice background with her love of writing to transform words into powerful stories of romance and danger.

What if one day you discovered you were in the Witness Protection Program and didn’t know it?

This is the premise for my October book, TEXAS HOLIDAY HIDEOUT, which releases this month. My heroine, Melissa Morgan, learns she and her mother entered the program when Melissa was a child. Her mother never told her and, when Melissa witnesses her mother being murdered, she becomes the assassin’s next target. US Marshal Miles Avery steps in to protect the single mom and her son from a killer, but a leak in WITSEC leaves him with little options except to take his witnesses to his family’s ranch…and pretend she’s his wife for the holidays.

So, in celebration of TEXAS HOLIDAY HIDEOUT releasing this month, here are 10 things about the Witness Protection Security Program (or WITSEC) I learned during my research for this book.

Did any of these facts about WITSEC surprise you? I’d love to hear which ones. I had a lot of fun researching WITSEC for TEXAS HOLIDAY HIDEOUT. I hope you enjoy Miles and Melissa’s story! Look out for the next book in the series—middle brother Navy SEAL Paul Avery’s story—coming in TEXAS TARGET STANDOFF in March of 2021.

Through the Fire Blogs, October 8

Through the Lens of Scripture, October 9

Because I said so -- and other adventures in Parenting, October 11

She Lives To Read, October 13

For Him and My Family, October 13

To Everything There Is A Season, October 15

Labor Not in Vain, October 18

For the Love of Literature, October 20

Posted by Joan Nienhuis at 6:07 AM

This sounds pretty exciting! I never even heard of WITSEC till a few years ago.

Thanks for sharing your great  book and for the giveaway too.

Wonderful review! Sounds like a page-turner. Thank you for sharing.

I really enjoyed the review of the book. Sounds like my kind of read.