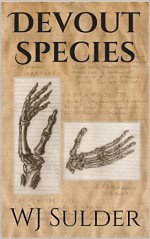 This is an unusual novel in that it is an exploration of evolution and the biblical account of creation within the context of a fictional account of two excavations. The fictional account follows Chloe, her professor, and two friends on a dig in Indonesia and another ten years later. Interspersed throughout the plot are short chapters outlining the course of the development of the universe, the solar system, life on earth and then intelligent humans.

The plot, following Chloe and the two digs, was okay. It did not really grab me. There was a little suspense near the end but the plot generally moved along deliberately and slowly. The professor's motive for causing the suspense at the end did not seem reasonable to me.

Sulder's writing style in straight forward and easy to understand. I found the evolutionary sections to be good explanations of evolutionary development. Sulder included portions of Genesis at the end of these evolutionary chapters, relating the ancient history to the biblical account.

Sulder's book is a unique way of trying to coordinate evolutionary history with biblical truth. There are many issues untouched, such as how humanoids became sentient beings with religious beliefs. Because of the title, I thought for sure something like that would have been explored in the book.

I am not sure those who adhere to the biblical creation account will be happy with this book. I did find it somewhat entertaining but not really answering any of the pesky questions within the evolution creation dialogue.

A biography of W J Sulder was unavailable.

Posted by Joan Nienhuis at 3:30 PM