The Sound of Falling Leaves by Lisa Carter 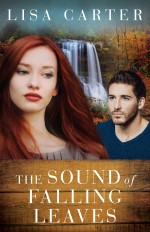 This is a very interesting novel about people living in an isolated Appalachian community. The plot structure is mostly about characters, their past and how it determines their present actions as well as present relationships. There is a bit of a mystery but even that is based on the past events of a belligerent family having political and law enforcement control of the area.

The main characters, Zeke and Tessa, both have huge back stories. These historical events are revealed with painstaking slowness. The fire that changed Tessa's life is referred to obliquely for so long I searched online to see if this novel was a sequel. Finally, about halfway through the book we learn all about the fire. I wish it had been given to us much earlier. I got so frustrated at Tessa's actions, not knowing the details of why she behaved as she did. I felt I could not really appreciate her struggles during the first half of the book. Zeke also has a back story. His is so complex that it took a great deal of explaining near the end of the novel.

I always like it when I learn something when I read a novel and this time it was about the forming of the Great Smoky Mountains National Park. Many families were uprooted and displaced. Whole communities were forced to move. It made me think about personal rights and the government action of eminent domain.

I think the strength of this novel is the setting. I was fascinated by the long standing culture of the people living in this Appalachian community. Carter did a good job of transporting me into a part of the country so different from my own. There is a hint there might be a sequel. I will be looking for it.

This is a novel for readers who like one revolving around character, character revelation, character interaction, and ultimately character transformation through the gospel. There is some suspense but it is not the focus of the plot. Potential readers should be aware that rape is a large part of past events in the community. While not described, the solving of that part of the mystery may trigger intense emotions. There is a good discussion guide at the end of the book to help readers think about the many issues the novel includes.

Lisa Carter is the bestselling author of seven romantic suspense novels, four historical novellas, and a contemporary Coast Guard series. Her book, Under a Turquoise Sky, won the 2015 Carol Award for Romantic Suspense. She is a native of North Carolina. You can find out more at https://www.lisacarterauthor.com/.