The Sowing Season by Katie Powner 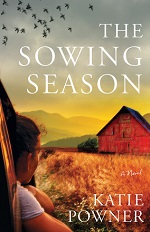 Forced to sell his family farm after sacrificing everything, 63-year-old Gerrit Laninga no longer knows what to do with himself. 15-year-old Rae Walters has growing doubts about The Plan her parents set to help her follow in her father's footsteps. When their paths cross just as they need a friend the most, Gerrit's and Rae's lives change in unexpected ways.

This is certainly a touching novel. Having been raised on a farm in western Washington and being of Dutch descent, Powner has done a good job of creating Gerrit and his dedication to the dairy farm. His stubbornness and decisions to put the farm before the needs of his children is very real. I could understand how he had alienated his children and his wife. Right on for character construction there.

I appreciate the interesting correlation between Rae's teenage social interaction development and the older Gerrit's struggle with the same. Powner added another young person, Morgan, painfully figuring out what the future held. I was engaged in how these people really tried to figure out new experiences and relationships.

One aspect of the novel I found lacking was the setting. Gerrit felt the land was very important to him. He loved it and he loved working outside. But we readers never really saw what he would have seen, the snow capped Cascades to the east or the towering Olympics to the west. Was the farm flat or with hills? Were there pockets of trees as is often the case in western Washington farms? I at first thought the story's location was up north towards Lynden where there are so many Dutch farmers. But then it became clear the location was farther south and close to I-5. I would have liked to see the narrative grounded more distinctly in its location.

This is a touching novel and I recommend it. Older readers will appreciate the struggles Gerrit had in trying to find his way after life as he had known it for decades suddenly changed. The novel is a very good debut effort and I will certainly be looking for the next one from this author.

Katie Powner grew up on a dairy farm in the Pacific Northwest but now calls Montana her home. She has worked alongside her husband in youth ministry for over a decade and is a mom to the third power: biological, adoptive, and foster. In addition to writing fiction, she blogs about family and advocates for more families to open their homes to children in need. The Sowing Season is her debut novel. You can find out more at www.katiepowner.com. Photo: E.A.H. Creative Photography.