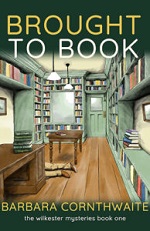 There’s nothing in Emily Post about dealing with murder.

Now he and his murder are the reason Katrina is spending her spare time with Wilkester detective, Todd Mason. Or, that’s what she tells herself.

Why would anyone want to kill Frank Delaney? Who would do it? And is Katrina herself even safe?

Mixing faith, literary humor, sweet romance, and a cozy mystery that will keep you guessing, Barbara Cornthwaite’s first Wilkester Mystery has everything you want for a cozy read.

Begin your investigation of Brought to Book today.

I loved this book. It has everything I appreciate in a Christian mystery. The characters are crafted very well. Katrina is a Christian who acts like one. She reads Scripture, she prays for insight as she wonders about her future, and she has preconceived ideas as to what she thinks God has planned for her. And Todd is another well crafted Christian although he is in a bit of spiritual turmoil because of recent events in his life. I really liked that Todd was sensitive to his role as detective when he began to have feelings for Katrina. Both of these characters, as well as the supporting ones are portrayed very well as they think Christian thoughts and do Christian things. Well done.

I like to learn something when I read a novel and Cornthwaite is a master in this area. I learned a great deal about antiquarian books and forgeries. I learned the difference between adjunct, associate and full professors. I learned about foster children and some of the trauma they and their foster parents experience. All this information was seamlessly woven into the plot. Well done.

The mystery is good. The romance is even better because it was crafted so well. This book was a joy to read. I am excited because I already have the next in the series and can't wait to read it.

Barbara Cornthwaite lives in the middle of Ireland with her husband and children. She taught college English before “retiring” to do something she loves far more; her days are now filled with homeschooling her six children, trying to keep the house tidy (a losing battle), and trying to stay warm in the damp Irish climate (also a losing battle). She is surrounded by medieval castles, picturesque flocks of sheep, and ancient stone monuments. These things are unappreciated by her children, who are more impressed by traffic jams, skyscrapers, and hot weather.

Meeting of the Minds

Detective Todd Mason knew Katrina was the one the first time he met her. The woman had witnessed a murder—if not with her eyes, at least with her ears. She’d seen the man dying and called for help, afraid all the while that the killer would return for her. So much he’d been told before he went into the interrogation room.

“How’s she handling it?” he asked the officer who had arrived first at the scene and escorted her to the police station.

“Not too badly,” said Gary. “She’s in shock, of course, but she’s trying to hold it together. Katrina Peters. She’s in Room 2.”

He’d gone in then and gotten his first look at her. Late thirties or early forties. Brown hair that fell to her shoulders in loose waves. Brown eyes that were red-rimmed from crying. Hands clutching a tissue. She managed a faint smile when he walked in.

“Hello, Ms. Peters. I’m Detective Todd Mason. I need to ask you some questions, if that’s all right.”

“Miss,” she said, almost as a reflex.

“I beg your pardon?” Todd wasn’t sure he’d heard her correctly.

“It’s Miss Peters.” She said it firmly, repudiating the term Ms. even at such a stressful moment. Something made her blush then, and he saw her glance at his left hand. “Never mind,” she murmured.

She’s afraid I’ll think she’s trying to advertize her availability. It amused Todd to see the blush—if only she knew how refreshing it was to see a woman who would even be conscious of such a thing. Old fashioned, he thought. In a good way.

She answered his questions as calmly as she could, and even apologized for the tears that insisted on coming out now and then. When she alluded to Daniel in the lion’s den, he knew she really was out of the ordinary, and it took all his self-control not to offer to drive her home himself.

To join the investigation, read your copy of Brought to Book today.

For the Love of Literature, October 12

For Him and My Family, October 17

As He Leads is Joy, October 19

Labor Not in Vain, October 20

She Lives To Read, October 21

Because I said so -- and other adventures in Parenting, October 21

Posted by Joan Nienhuis at 6:33 AM

I'm so glad you enjoyed the book! I hope you like book 2, as well. Thanks for the kind review!

I really enjoyed this book! I agree, it is very well-written.

I'm reading a lot of mysteries right now. Looking forward to this one!

Thanks for taking time to share your book with us and it's always a pleasure in our family to learn about a new one.