Point of Danger by Irene Hannon 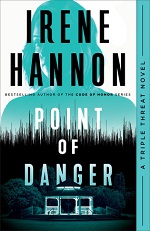 This novel centers on relationships rather than mystery or suspense. The major aspect of the plot is woven around Eve, the conservative radio personality and Brent, the detective assigned to her case when she receives threats. Much of the novel involves their thinking and dialogue regarding a potential romance. Also involved in the plot are issues within two troubled marriages. There is very little suspense with only one scene near the end. Hannon may have tried some psychological suspense for Eve with the threats but Eve seemed to be too confident of a woman to let them bother her.

Eve is a Christian conservative who freely and boldly declares her viewpoints on her radio talk show. The threats to her life seem to emphasize the current political divide. Rather than an entertaining and engaging plot, I almost felt like Hannon was making a statement with her novel.

This is a novel for readers who like an emphasis on relationship issues more than mystery or suspense. I have read nearly all of Hannon's suspense novels and this one seems to be a deviation from her usual top notch effort.

Irene Hannon is the bestselling author of more than fifty novels. Her books have received three RITA Awards from Romance Writers of America and she is a member of that organization's Hall of Fame. Her many other awards include National Readers' Choice, Daphne du Maurier, Retailers' Choice, Booksellers' Best, Carol, and Reviewers' Choice from RT Book Reviews magazine, which also honored her with a Career Achievement Award. She is also a two-time Christy Award finalist. You can find out more at www.irenehannon.com. Photo credit: DeWeese Photography.

Posted by Joan Nienhuis at 9:47 AM