On Borrow Crime by Kate Young 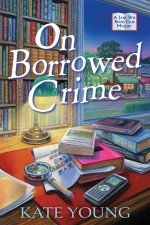 This cozy novel was a bit of a slow read for me. I had a little difficulty getting in to it and being engaged by it. Lyla is a good heroine in that she wants to be an actual private investigator. I like female amateur sleuths. She just did not seem to have to mind for it, however. She is not the strong kind of character I like. The members of her book club were interesting but not to the point of being engaging. I would have liked less entertaining and doing southern things and more serious sleuthing.

The plot was complex and I am not sure I understood all of it. There is the current mystery of the body of one of the book club members being dumped on Lyla's door step, in a suitcase no less. Lyla and the others find out this woman had been investigating a murder from some time ago. Lyla tries to figure them both out and really doesn't seem to do too good of a job at it. She bumbles into solving the mystery in the end and did show some quick thinking at the final suspense.

I liked the idea of a group of women reading murder mysteries and then becoming involved in solving real mysteries. They wade through a number of red herrings. It seems like so many could have done the murders. The actual murderer was not a surprise but the reason for the contemporary death was a bit convoluted.

I think Lyla has potential as an amateur sleuth. I'd like to see her toughen up a bit, be more independent, and develop her head for investigations. I'll check out the next in the series to see how Lyla and the others hone their skills.

Kate Young writes Southern mystery novels. She is a member of Sisters in Crime and the Guppy Chapter. She lives in a small town in Georgia with her husband and their three kids. You can find out more at www.kateyoungbooks.com.

Posted by Joan Nienhuis at 4:55 PM