Praying for Emily by Tom, Kari and Emily Whitehead with Danelle Morton 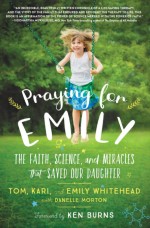 This is a very touching story. I am impressed with the honesty of Emily's parents as they share their journey. We readers follow along as they see the bruises then receive the diagnosis. We share in their momentary celebrations and grieve with them on the setbacks. Then there is a relapse, indicating the cancer had become resistant to the standard therapies. There is the suggestion to arrange hospice. Then there is the hope of a new type of treatment.

In addition to being a very well written memoir, this book is very informative. I found out how a bone marrow transplant works, including the high dose of chemo and full body radiation wiping out the bone marrow, making room for the healthy cells to grow.

I learned about T cell therapy, how the cells are harvested from the patient's blood by separating them in a specially designed centrifuge, growing them, attaching a synthetic molecule giving them the ability to recognize and destroy cancer cells, then reinfusion, increasing their presence in the blood stream. The engineered T cells continue to kill cancer cells until they are gone. While the therapy had been tried on a few adults, Emily was the first child to experience it. And it did not go well. Soon it looked like Emily would die.

There is a very positive aspect of this memoir, revealing the faith and dogged determination of Emily's parents. Emily is a trooper through so much of the treatments. And there are special people who come alongside like Nurse Karli and her well planned illustrated treatment explanations for Emily. There were university students like Becky and Ariana and dedicated family members.

There is an agonizingly realistic side to the memoir too. Emily's parents were desperate at times, moving Emily from one hospital to another and then back, unsure of where the best treatment for Emily was to be found. They second guessed their choices. They alienated one doctor with their decision and subsequent reversal. Such raw honesty will certainly encourage other parents in a similar situation.

I highly recommend this captivating memoir, well written and informative. It will inspire your. 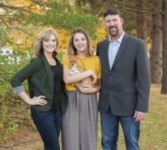 Tom, Kari, and Emily Whitehead are cofounders of the Emily Whitehead Foundation, which raises funds and awareness for pediatric cancer immunotherapy research. Emily's story has been featured in Ken Burn's PBS documentary Cancer: The Emperor of All Maladies, HBO's VICE Special Report: Killing Cancer, the New York Times, the Washington Post, Parents magazine, CBS Evening News, NBC Nightly News, ABC World News Tonight, Fox News, CNN, and the Stand Up to Cancer telethon. The Whitehead family travels worldwide as keynote speakers to inspire others and advocate for research funding to develop less-toxic childhood cancer treatments. When they aren't traveling, Tom works as a journey lineman for Penelec of First Energy, and Kari is a registered dietitian and research project manager. Emily attends high school and plans to become an artist or filmmaker. They live in Central Pennsylvania.

Danelle Morton is a journalist and author who has collaborated on sixteen books including four New York Times bestsellers.

Posted by Joan Nienhuis at 3:26 PM