Death by Gravity by Sharon Linnea 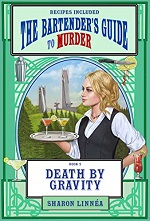 This is the second book in The Bartender's Guide to Murder series and one I enjoyed. (Read my review of the first book in the series, Death inTranquility.) I like the setting of the Olympic snow training center (Lake Placid) and the plot revolving around gold medals and frustrated potential Olympian athletes. We readers are thrust onto zip lines and luge runs in the midst of deadly suspense.

I like Avalon, a reluctant sleuth and accomplished bartender. It was interesting to have some of her walls come down in this novel as we find out a bit more about her family history. Linnea provides a good balance of character development and murder investigation, periodically interrupted with a potentially ghostly appearance.

A decades old unsolved kidnapping is also part of the plot. Avalon works to solve that mystery alongside what appears to be two current murders. While doing that, Avalon also helps those she is getting to know better, maybe actually becoming a friend to others.

I don't drink alcohol but the cocktail recipes included look delicious. While Linnea is an accomplished bartender, the recipes are from someone else and you can see videos of them being made at https://bartendersguidetomurder.com/.

Sharon Linnéa is a TIPS certified bartender and wrote the bestselling Eden Series (Chasing Eden, Beyond Eden, Treasure of Eden and Plagues of Eden) with B.K. Sherer, as well as the standalone These Violent Delights, a movie murder series. She enjoyed working with Axel Avian on Colt Shore: Domino 29, a middle-grade spy thriller. She is also the author of Princess Ka’iulani: Hope of a Nation, Heart of a People about the last crown princess of Hawaii which won the prestigious Carter Woodson Award, and Raoul Wallenberg: the Man Who Stopped Death. She was a staff writer for five national magazines, a book editor at three publishers, and a celebrity ghost. She lives outside New York City with her family. In Orange County, she teaches The Book Inside You workshops with Thomas Mattingly. You can find out more at www.SharonLinnea.com.

Posted by Joan Nienhuis at 9:36 AM