The Least of These Blog Tour 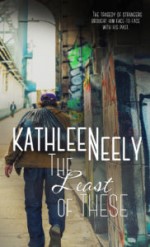 Book:  The Least of These

Journalist Scott Harrington sets out to write a documentary on the lives of three homeless men. He hopes to win a prestigious award and his father’s respect. In the process, he uncovers stories of heartbreak, trauma, and rejection, causing him to revisit his own tragic past and the guilty secret that he holds.

Claire Bassett has been searching for her husband who went missing a year ago. The attentions of another man cause her to question if she should continue to search or move on with her life. As Scott and Claire’s stories overlap, will there be restoration or rejection?

This is a touching story of how one man and his choices change the lives of many. It is a good reminder that when we help “the least of these,” we are really ministering to the Lord. It is also a good reminder that every homeless person has a story. It is also a reality check. While God desires reconciliation, it depends on individuals and not all relationships have happy endings.

Neely's writing style is good. I felt the novel got off to a bit of a rough start as the narrative alternated between two separate lives. It is not until half way through the book those two lives intersect. While I would have appreciated some foreshadowing early, so I could anticipate a connection, it was worth waiting for. I also would have liked some foreshadowing of the reason for Andrew's distress. That didn't come until three quarters of the way into the book.

I enjoyed reading this novel, appreciating the life lessons it contains. A reading group could have some good discussions about several issues though a discussion guide was not included in the copy I read.

Kathleen Neely is the author of The Street Singer, Beauty for Ashes, and The Least of These.  Her fourth novel, True North, will be released in July, 2021. She is a former elementary teacher. Following her years in the classroom, she moved into administration, serving as an elementary principal at Eden Christian Academy in Pittsburgh, PA and at Shannon Forest Christian School in Greenville, SC. Kathleen is an alumnus of Slippery Rock University in Pennsylvania and Regent University in Virginia.

Among her writing accomplishments, Kathleen won second place in a short story contest through ACFW-VA for her short story “The Missing Piece” and an honorable mention for her story “The Dance”. Both were published in a Christmas anthology. Her novel, The Least of These, was awarded first place in the 2015 Fresh Voices contest through Almost an Author. She has numerous devotions published through Christian Devotions. She continues to speak to students about writing. Kathleen is a member of Association of Christian Fiction Writers.

She resides in Greenville, SC with her husband, two cats, and one dog. She enjoys time with family, visiting her two grandsons, traveling, and reading.

I’ve always been an avid reader, but began writing at a period in my life when I didn’t have time to commit. While raising three sons, I also worked full time as a teacher, then later as an elementary principal. That left little time for writing. I’d plug away at my manuscript then neglect it for months. Those months became years. Every now and then, I would pull it out, re-read it, then add a little to it.

When nearing retirement, a local ministry hosted Michael Yankoski as a keynote speaker. It prompted me to read his true story titled Under the Overpass, an account of his intentional decision to live among the homeless to share their story. This so closely mirrored my fictional account of journalist Scott Harrington. I found myself inspired to pull out the abandoned manuscript and get serious. I joined a writing group, attended conferences, and met with two other writers weekly to critique and be critiqued. That manuscript, The Least of These, went on to win first place in the fiction category of a contest titled Fresh Voices.

Scott, the protagonist in The Least of These, has a complex personality. He has defied the path that his father planned for him, yet remains burdened by his father’s disappointment. He lives in the shadow of his deceased brother and carries a secret that weighs heavily on his conscience. If he could win a Pulitzer or another top journalism award, perhaps he’d earn his father’s respect. But his altruistic nature sidelines his goal. The homeless men he intends to write about become real people with real needs. Little did he know that their circumstances would brush up against his own guilt.

Here’s a brief excerpt of a scene between Scott and Stella:

“Scott. Look at me.” She touched my hands to move them from my face. “Look at me. You were fifteen years old. You were a child—a child placed in a terrible situation. You’d lost the intimacy with your brother, the only person you’d ever had a relationship with. You had a domineering father and an absent mother. Don’t carry this burden of guilt. It’s not yours. Put it where it belongs. Your brother made bad choices. Your parents didn’t parent well. A fifteen-year-old kid can’t be expected to handle the gravity of that situation.”

That’s a smidgeon of what’s ahead in the pages of The Least of These. I invite you to join me in the journey. Meet Claire, a wife whose husband has gone missing. Tyler, whose mother abandoned him; and Stella, a successful bistro owner whose unrequited love begins losing hope.

Because I said so -- and other adventures in Parenting, February 3

For Him and My Family, February 11

Posted by Joan Nienhuis at 6:04 AM

Thanks for reviewing her book. It sounds like it could be a thought-provoking story.