Her Every Move by Kelly Irvin Blog Tour 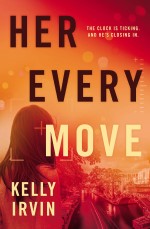 He’s a cop trying to stop a serial bomber. And she’ll stop at nothing to clear her own name.

When a deadly bomb goes off during a climate change debate, librarian and event coordinator Jackie Santoro becomes the prime suspect. Her motive, according to Detective Avery Wick: to avenge the suicide of her prominent father, who was accused of crimes by a city councilman attending the event.

Though Avery has doubts about Jackie’s guilt, he can’t exonerate her even after an extremist group takes responsibility for the bombing and continues to attack San Antonio’s treasured public spaces.

As Jackie tries to hold her shattered family together, she has no choice but to proceed with plans for the Caterina Ball, the library system’s biggest annual fundraiser. But she also fears the event provides the perfect opportunity for the bomber to strike again.

Despite their mistrust, Jackie and Avery join forces to unmask the truth—before the death toll mounts even higher.

This novel starts out with plenty of action and the body count increases as the story progresses. We follow Jackie, organizer of the initial bombed event, as bombs are destroying parts of San Antonio and people close to her are getting killed. The plot centers around the police hunting for the bomber. Added to that is a budding romance between the lead police investigator, Avery, and Jackie. Avery is a decade older than Jackie and is divorced. She's a librarian and he doesn't read. She's a committed Christian and he has given up on God. Their romance is certainly unconventional and a bit unbelievable.

There is much character interaction in the midst of tragedy and police investigation. The character development is done well. How a person responds to tragedy is a major issue in the novel. Some grow in faith while others become bitter, cultivating hate. There is some family alienation in Jackie's family while Avery, oddly enough, gets along really well with his ex.

A steady stream of patrons stood and edged toward the center aisle. A low murmur swelled to the sound of hundreds of people all talking at once. Soon they’d be in front of Jackie, impeding her progress from the parking garage and on the narrow, one-way downtown streets of San Antonio.

“Great job, Jackie. Looks like your boss was wrong.” Sandoval’s constituent services director, Tony Guerra, sauntered up the aisle toward her. “Climate change opponents can coexist amicably in the same space. And so can city manager and city council staff.”

“Thanks, but it took a whole host of partners to make this happen. And it’s not over yet.” Jackie stuck her hand on the door lever that would release her to the Tobin’s massive lobby.

She liked Tony, which was a good thing since he’d asked Estrella to marry him. However, he wore his political ambitions like an obnoxious neon-pink tie.

“I have to go. I want to make sure there are no last-minute snags with the reception. Then it’s back to fine-tuning the altars for the Catrina Ball. It’s only a week away, and I’m behind because of the debate.”

“You never let up, do you? Are we still on for the Spurs game tomorrow—”

A powerful force knocked Jackie from her feet.

Her skull banged on the hardwood floor.

Sharp projectiles pelted her face in a painful ping-ping.

Muffled screams and even her own moaning seemed strangely distant. “Estrella? Tony? Bella?”

If they answered, Jackie couldn’t hear them. She dragged herself onto her hands and knees. Glass and sharp metal pierced both. She forced open burning eyes.

Heavy black smoke shrouded the hall. Metal and debris like deadly confetti showered her. She raised her arm to her forehead to protect her face from the remnants of folding chairs and electronics.

Warm blood dripped from her nose. The acrid taste of smoke and fear collected in her mouth. Her stomach heaved. Her pulse pounded so hard dizziness threatened to overcome her.

Water, like torrential rain, poured from above. Rain, inside? Her ricocheting thoughts made no sense. Jackie shook her head. Neither the smoke nor the clanging in her brain subsided.

The smoke had triggered the sprinklers.

Where there’s smoke there’s fire. The old cliché ran
circles in her mind like a children’s nursery rhyme.

Estrella’s mama and papa would never forgive Jackie if something happened to their sweet daughter. Mercedes and Mateo always saw Jackie as the instigator of trouble. And they were usually right.

Ignoring pain and panic, she crawled forward. Sharp metal bit into her skin. Where were her shoes?

“What happened?” He struggled to sit up. Blood poured from an open wound on his scalp, his nose, and a cut on his lip. “I have to get to Estrella and Diego.”

He might have yelled, but Jackie could barely make out the words. She leaned back on her haunches. “You’re hurt. Does anything feel broken?”

“No, but I can’t hear anything.” He wiped at his face. Blood streaked his once crisply starched white shirt. “Why can’t I hear?”

“It’ll pass. We have to get everyone out.”

With a groan, Tony leaned over and vomited on the floor. He wiped his mouth with his sleeve. “Okay, let’s go.”

“Everyone out. If you can walk on your own, evacuate.” One of the contract security guards hired for the debate loomed over them. “The bomb squad is on the way. Go, go.”

“We’re fine. We’ll help get the others out.”

“Negative. Get out, there could be more bombs.”

Bestseller Kelly Irvin is the author of 19 books, including romantic suspense and Amish romance. Publishers Weekly called Closer Than She Knows “a briskly written thriller.” The Library Journal said of her novel Tell Her No Lies, “a complex web with enough twists and turns to keep even the most savvy romantic suspense readers guessing until the end.” The two-time ACFW Carol Award finalist worked as a newspaper reporter for six years on the Texas-Mexico border. Those experiences fuel her romantic suspense novels set in Texas. A retired public relations professional, Kelly now writes fiction full-time. She lives with her husband professional photographer Tim Irvin in San Antonio. They have two children, three grandchildren, and two ornery cats.


Click here to view Her Every Move by Kelly Irvin Participants.

I received a complimentary egalley of this book through Partners in Crime Virtual Book Tours. My comments are an independent and honest review. The rest of the copy of this post was provided by Partners in Crime Virtual Book Tours.
(My star ratings: 5-I love it, 4-I like it, 3-It's OK, 2-I don't like it, 1-I hate it.)
Posted by Joan Nienhuis at 6:03 AM

I have seen many great reviews for this book, which means it's going on my wishlist.