Thunder in the Soul by Abraham Joshua Heschel 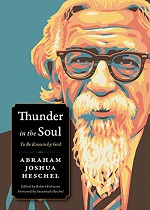 Abraham Heschel was a Jewish theologian and religious philosopher. As a Christian, why would I read Heschel? He wrote for people encountering God and his thoughts were not confined to one faith. As his daughter notes in the forward, many say, “A Jew has brought them closer to God, deeper in their prayer, strengthened in their faith,” (180/1248) There is a long forward in this book, explaining much of Heschel's life and work. That makes this book a good introductory one for readers not familiar with him or his work.

There were several areas in this book I found particularly insightful. One was Heschel's thoughts on piety. A pious person's main interest is God. This concern for God, “becomes the driving force controlling the course of his actions and decisions, molding his aspirations and behavior.” (357/1248) That is thought provoking. I liked Heschel reminding us that our concern is not for more knowledge but to open our lives to God. I appreciate Heschel's emphasis on transcendence, the reality of God beyond all things.

I appreciate Heschel's exploration of God's character. “No single attribute can convey the nature of God's relationship to man.” (548/1248) Justice is God's nature, as is love and mercy, as is divine anger. “It is divine anger that gives strength to God's truth and justice.” (548/1248) He has very insightful thoughts on prayer. He explores the call and message of prophets as they reveal humanity's indifference to evil. (634/1248)

Some of Heschel's writing in this book requires reflection to comprehend. This is not a book a reader will breeze through. Nonetheless, there are thought provoking insights for all those who desire to understand more of how God interacts with man and how man encounters God.

Abraham Joshua Heschel (1907-1972) was born in Warsaw, Poland and studied at the University of Berlin. He received orthodox rabbinical ordination but was at home in all Jewish communities. He wrote on the philosophical and theological issues of his day. He began teaching at the Judische Lehrhause, an educational institute for adults, in 1937. He was deported to Poland in 1938, went to London and arrived in the U.S. in 1940. He taught at Hebrew Union College in Cincinnati and in 1945 joined the faculty at The Jewish Theological Seminary in New York.