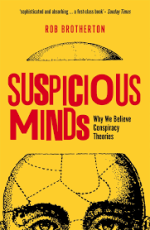 I read this book to help me understand why so many people in the U.S. believe conspiracy theories when, to me, there seems to be no evidence for support. My college degree is in physics and I was taught to objectively evaluate evidence. That people persist in believing something when all the evidence seems to support the opposite just boggled my mind.

Brotherton helped me understand what's going on. We seek order and are uncomfortable when events make no sense. We see connection when there really is none. Believing a conspiracy theory helps us make the unbelievable believable. And the way our brains work, we have biases. There is proportionality bias. We want the magnitude of the event to match the magnitude of what caused it. (That's why it's hard to believe one lone man managed to assassinate President Kennedy.) There is confirmation bias. We see what we expect to see, evidence for our preconceptions. (That's why some would never watch a cable network that opposes their views.) There is biased assimilation. We interpret ambiguous information in light of what we already believe. (A school shooting to some demands gun control while others see it as a sign more people need to be armed.)

Conspiracy theories have been around for thousands of years, such as AD 64 when Rome burned. Surveys show that around two thirds of Americans believe some political conspiracy theory and nearly every one believes a conspiracy on something. (Remember that last professional football game when the referees conspired to make nearly all the calls against your team?) The less control a person has over their circumstances, the more powerless they feel, the more alienated they feel from society, the more likely they are to believe a conspiracy theory. (104)

I highly recommend this book. It really helped me understand the current situation in the U.S.

Rob Brotherton is an academic psychologist and science writer. He completed a doctoral degree on the psychology of conspiracy theories. He taught classes on why people believe weird stuff and science communication as a member of the Anomalistic Psychology Research Unit at Goldsmiths, University of London. He now lives in New York City. You can read his thoughts on conspiracy theories at https://conspiracypsychology.com/.

Posted by Joan Nienhuis at 3:54 PM