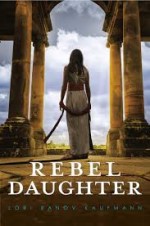 I've read a bit about the situation for Christians in Jerusalem during the few decades before the city was razed by general Titus, son of Vespasian, in AD 70. I hadn't really given much thought about the experiences of the Jews during that time until reading this novel. Insights into the culture and religious beliefs of the time are many. Because of that, this novel is not only very entertaining but very informative as well.

Kaufmann helped me understand how Jews felt living under Roman occupation. I saw how some Jews saw an opportunity to become prosperous by partnering with the foreigners. Others hated the actions of the Romans. They had lived under Roman rule for more than a century and many became rebels, fomenting a revolt. After initial rebel success, the Roman army returned, placing Jerusalem under siege. Kaufmann gives us a realistic look at what that meant for the thousands of Jews in the city.

In the Author's Note, Kaufmann says she immersed herself in the first century during the ten years she was writing this novel. It shows. The attention to detail is admirable. I am impressed that the novel centers on real people of that day. Much of the story is the result of an inscription on a tombstone. Kaufmann did a great job weaving a fictional account while remaining true to known facts.

As Kaufmann says, “History is not a dry record of events; it's a portal to the human soul, one that connects us to all the people who lived before.” (378) I highly recommend this novel to readers who want to enter into that door of human experience from the past. History comes alive under her pen.

You can enter to win a copy at Goodreads here. Contest ends March 6, 2021.

Lori Banov Kaufmann was a strategy consultant for high-tech companies before she became a writer. She has an AB from Princeton University and an MBA from the Harvard Business School. Rebel Daughter is her debut novel. She lives in Israel with her husband and four adult children. You can find out more at https://www.lorikaufmann.com/. Photo by Cathy Raff

Posted by Joan Nienhuis at 6:22 AM