The ABCs of Global Warming by Charles Siegel 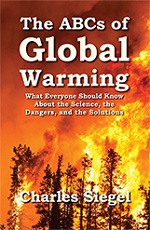 There is a great deal of misinformation about climate change being circulated today. This book offers readers an understandable exploration of the science behind climate change, the dangers of not dealing with it, and suggestions for approaches to developing a stable climate.

Siegel's book is very understandable. He has many charts and graphs to visualize his information. And the book is well documented with nearly the last quarter of the book listing the footnotes.

I was impressed with some of the facts he gives, such as arctic ice now covers only half as much area after the summer melt as it did in 1979. (154/1256) The last four decades have seen successive new records for the hottest decade in history. (175/1256)

I like his insights into the current effects of global warming. There is evidence the warming arctic is making the jet stream less stable. A meandering jet stream allows cold air to move much farther south than usual. We have seen this just recently with the freezing temperatures in Texas.

His section on possible solutions is informative. Those unsure of what cap and trade or emissions taxes are and how they would work will find answers here. And, as a bonus, Siegel addresses deniers and reveals their lack of knowledge and understanding of the facts.

I recommend this book as a readable, short, yet very informative book for those who want to understand global warming, the science, the future dangers, and possible solutions.

You can read portions of the book here.

Charles Siegel is the author of a number of books on various topics, from urban planning to politics to computer programs to Christian biblical texts.

Posted by Joan Nienhuis at 1:27 PM