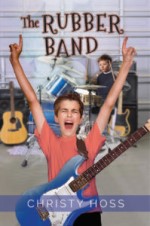 What do Roadkill Rocky, Bossy Becca, and Pinhead Eddie have in common? Nothing. A rag-tag bunch of elementary school kids come together to form a rock and roll band and enter the Sun Valley talent contest. Will they be strong enough to overcome prejudice and see the dream of winning through, or will an unforeseen medical emergency break the bond of the band?

This is a fun novel for young readers with third graders as the main characters. It's a fun story but it also contains some good lessons on friendship, judging others, bullying, humility, and more. My favorite lesson was about thinking something was really bad, like being sent to the principal's office, yet finding out it led to something really good, like developing unexpected friends. There is an emergency hospital stay in the book. This would be a good book for an elementary reader having a similar experience.

I thought it a bit of fantasy that third graders could develop a garage band worthy of even being heard, but it's been a long time since I was that age. There are many good relationship lessons in this book and it would be a good one for parents to read along with their kids and then discuss. You'll have fun too. I mean, when was the last time you read about armpit farts?

Christy caught the writing bug in second grade after winning a prize for a five-page story about her dog, Noodles. Mrs. Olson told her she was destined to be a writer and that dream never left her thoughts. After teaching elementary school for fifteen years, Christy fulfilled her childhood dream with her debut novel, The Rubber Band. She substitute teaches to support her writing career, deriving writing inspiration from the students and situations she encounters.

At age twenty-five, she was diagnosed with type-one diabetes but refuses to let it limit her. Her diabetic alert dog, Aiden, has saved her life uncountable times and will appear in future installments of The Rubber Band. Christy lives by this equation: Living + diabetes = LIVE-abetes.

Christy is a freelance editor and writes children’s Bible stories for Focus on the Family ClubHouse magazine and has written articles for Guideposts. She is a featured speaker for conferences, retreats and special events.

Christy lives in Northern California with Kevin, the love of her life. They have three grown children.

Noodles is the reason I am a writer. Noodles was my childhood dog’s name. I loved her oodles and oodles. She was a dachshund, not a poodle. I often drew her in my doodles. (Can you tell I’m an elementary school teacher?) A few short years ago, when I was in second grade, I entered a class writing contest. My story was five sentences long but won first place. The teacher told me I was destined to be a writer. That encouragement never left me. I grew up in the small town of Thief River Falls, Minnesota, and always loved writing in school, especially fiction. I wrote stories for my friends and for myself to create situations I could only dream of. As an adult, I moved to California, determined to live for God. He led me back to college where I fell in love with writing again. I won a state-wide award for my feature article in the JC’s newspaper, confirming my heart’s desire. Fast forward through marriage, kids, and a teaching job—my friends begged me to write about a recurring night dream I had, which was like watching the ending of a suspense thriller movie. Through writing conferences, critique groups and late nights, I wrote Palms of Death by starting at the end and working my way backwards. After rewriting it several times, I self-published it in 2018. At my first major writers’ conference, the Lord undeniably called me to write. So, the real reason I write is not because of Noodles, but because I want to always be a faithful follower of Jesus Christ and wholeheartedly follow His direction. That’s my story, just a bit of the whole kit and caboodle.

Because I said so -- and other adventures in Parenting, February 23

For Him and My Family, February 27

Posted by Joan Nienhuis at 6:32 AM

Thank you for sharing your review and the book and author details, this sounds like a great story to share with my grandchildren

The author's note is fun to read!

I'm so glad you achieved your dreams and can't wait to read the story!